What is Curium? • Earth.com 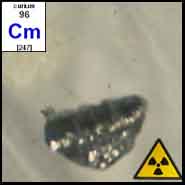 is a synthetic radioactive chemical element with the symbol Cm and atomic number 96. This transuranic (atomic number greater than 92) element of the actinide series is produced by bombarding plutonium with helium ions. Curium does not occur naturally. A few commercial applications utilize the production of Cm, but someday it may be useful in other areas including radioisotope thermoelectric generators. Curium is silvery-white in color and is chemically reactive. It was named for Marie Curie and her husband Pierre.

Curium was first synthesized in 1944 at UC Berkeley by a team of scientists. Its chemical qualities were identified at the University of Chicago. It was the third transuranic element to be discovered even though it is fourth in the actinoid series. The discovery of both Cm and americium were kept confidential due to the fact they were closely related to the Manhattan Project. The discoveries were first published on a radio show for kids, before they were officially presented on November 11, 1945 by the American Chemical Society. Curium was first produced in its elemental form in 1951.

Curium’s potential as a fuel for radioisotope thermoelectric generators has been significantly studied. The isotope Cm-242 can generate up to 120 watts of thermal energy per gram. However, because of its short half-life, the desirability to use Cm-242 on a large scale as a power source is questionable. Cm-243 has a half-life of 30 years and even though it cannot produce as much wattage as Cm-242, ii is possible that it could make an ideal fuel. Its only drawback is that it produces large amounts of gamma and beta radioactive emissions.