What is Desertification? • Earth.com
[object Object] 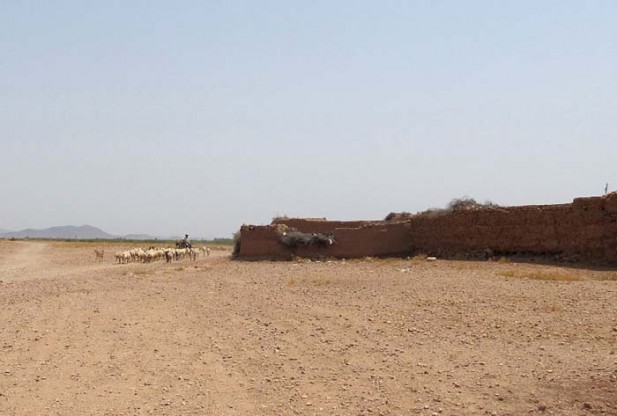 Desertification is a form of land degradation in which a comparatively dry land area becomes more and more arid, normally losing its bodies of water along with its wildlife and vegetation. This is a result of a variety of factors, such as climate change and human activities. Desertification is an important global, ecological, and environmental issue.

There is substantial controversy over the proper definition of the term desertification. The most broadly accepted of these is that of the Princeton University Dictionary which defines it as the process of fertile land transforming into desert typically as a result of deforestation, drought or improper/inappropriate agriculture.

The drylands take up about forty to forty-one percent of the Earths land area and host more than two billion people. It’s been estimated that some ten to twenty percent of drylands are already degraded. The entire area affected by desertification being between six and twelve million square kilometers. That about one to six percent of the inhabitants of drylands reside in desertified regions. Also that a billion people are under threat from further desertification.

As desertification occurs, the landscape progresses through different stages and also continues to transform in appearance. The desertification usually generates increasingly larger empty spaces over a large piece of land, a phenomenon referred to as tiger fur pattern.

The immediate cause is the removal of the majority of the vegetation. So this is driven by numerous factors, alone or in a combination, such as

The vegetation plays a significant role in determining the biological composition of the soil. Some studies have depicted that, in many of the environments, the rate of erosion and runoff decreases exponentially with the increase of vegetation cover.

Unprotected, the dry soil surfaces blow away with the wind or are also washed away by flash floods. So they are leaving infertile lower soil layers to bake in the sun causing for an unproductive hardpan. On the other hand, recent research has suggested that the migration and movement of large herds of wildlife and livestock has an essential role in the preservation of vegetation and fertilization of the soil, and that the removal of livestock and wildlife has been the main driver of the increasing desertification.

Image Caption: A scene in the high desert right outside of Marrakech, Morocco. A shepherd is guiding his sheep through the landscape in search of vegetation. Credit: Johntarantino1/Wikipedia (CC BY-SA 3.0)