What is Dysprosium? • Earth.com 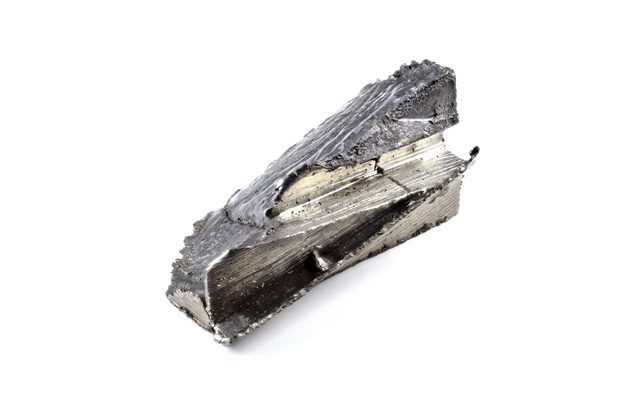 is a chemical element with the symbol Dy and atomic number 66. This rare earth element has a metallic, bright silver luster. It is not found freely in nature, but is found in various minerals, especially xenotime. It was first identified in 1886, but its pure form was not isolated until the use of ion exchange instruments were developed in the 1950s. Dy  salts are mildly toxic in the liquid state, while solid dysprosium in non-toxic. It is soft enough to be cut with a knife, and is easily machined without danger if overheating is avoided. Impurities can greatly affect the characteristics of dysprosium. It is typically used only in research as it oxidizes quite easily.

Dysprosium has the highest magnetic strength along with holmium. Its magnetic qualities increase in low temperatures, especially at temperatures lower than -306 degrees Fahrenheit. Its metals tarnish slowly in open air and when burned, form Dy oxide. Dy hydroxide is formed when it makes contact with water. The reaction time is quicker in warmer water and slower in cold water. The metal also reacts immensely with all halogens above 392 degrees F.

Dy oxide, which is found in powder form, is much more magnetic than iron oxide. Most of the its compounds are soluble in water, except for Dy carbonate and Dy oxalate.Dysprosium in nature has 7 known isotopes. All of which are stable, though dysprosium-156 is by far the most stable with a half-life of more than 1×1018 years. Of all the isotopes, dysprosium-164 is the most abundant, followed by dysprosium-162. 29 radioisotopes have also been synthesized. These range in atomic weight from 138 to 173. Of the synthesized isotopes, dysprosium-154 is the most stable with a half-life of 3×106 years. The next most stable isotope is dysprosium-159 with a mere half-life of 144.4 days. There at least 11 meta-stable isomers that range in atomic weight from 140 to 165. All of these isomers have half-lives of less than 200 millionths of a second (28 nanoseconds).

Dysprosium was discovered in 1886 when French chemist Paul mile Lecoq de Boisbaudran was working with holmium oxide. He attempted to isolate the Dy from the oxide, doing so after 30 attempts. Upon succeeding, he named the element dysprosium from the Greek word dysprositos, meaning “hard to get”. Dysprosium was not isolated in its pure form until the invention of ion exchange procedures in the 1950s.

Dysprosium is not encountered freely in nature, but is found in several minerals, including xenotime, fergusonite, gadolinite, euxenite, polycrase, blomstrandine, monazite and bastn site. It is also found in rare erbium and holmium. The main source of Dy comes from monazite sand. It is isolated from the sand along with other rare metals and then removed magnetically or by a flotation method. After another firing procedure using a helium chamber, the Dy can be separated from any impurities within it when cooled down. 100 tons of dysprosium is produced worldwide yearly.Dysprosium is used, along with other elements such as vanadium, for making laser materials.

Dysprosium cadmium compounds are a good source of infrared radiation that is useful in the study of chemical reactions. Dysprosium is also used in a variety of data storage applications, such as compact discs, for its magnetic behavior. Though Dy could be a source of energy for hybrid electric vehicles, it is not feasible as it would take as much as 3.5 ounces of Dy per hybrid car. Based on 2 million units per year, this would eat up the available supply of the metal rather quickly.

Dysprosium substitutes have been implemented and are more readily available. This substitution is also useful as a corrosion resistance in magnets and magnetic devices. Dysprosium is also used in dosimeters for measuring ion radiation. Calcium sulfate and calcium fluoride are doped with Dy and then exposed to radiation, which excites the Dy and it becomes luminescent. This luminescence is then measured to determine the degree of exposure to which the dosimeter has been subjected.

Dysprosium in the powder form may present an explosion hazard when mixed with air and an ignition source is present. Thin strips of dysprosium can also be ignited by a spark or by static electricity. Fires from dysprosium cannot be contained by water. Water and the Dy may react and produce even more flammable hydrogen gas. However, Dy chloride fires can be contained with water. Dy fluoride and dysprosium oxide are non-flammable. Soluble dysprosium salts, chlorides and nitrates are mildly toxic if ingested. The insoluble salts are not toxic. It is estimated that ingestion of about 17 ounces of dysprosium chloride could be fatal to a human.