What is Fermium? • Earth.com 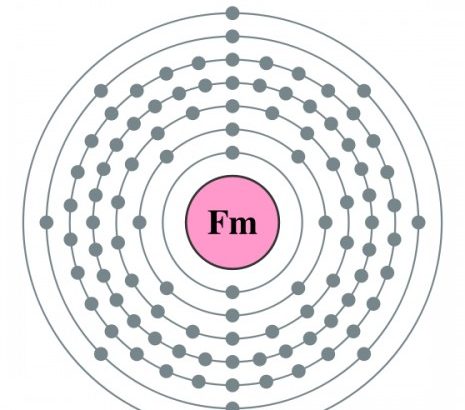 Fermium is a synthetic, radioactive metallic element. It has the symbol Fm and atomic number 100. It is an element in the actinide series. It is named after nuclear physicist Enrico Fermi. Fermium became the eighth transuranic (having an atomic number greater than 92) element discovered. It was first discovered in 1952 by a team of scientists led by Albert Ghiorso. They found fermium-255 in debris of the first hydrogen bomb explosion from Operation Ivy. Fermium-255 was created when uranium-238 combined with 17 neutrons in the intense temperature and pressure of the explosion. Findings of this compound were kept secret until 1955 due to tensions from the Cold War.
Only small amounts of fermium have ever been produced and isolated. Little is known about its chemical properties. Heavier fermium isotopes can be synthesized by bombardment of lighter elements (such as uranium and plutonium). The intense neutron bombardment needed to create fermium exists in thermonuclear explosions and can be replicated at laboratories such as the
High Flux Isotope Reactor at Oak Ridge National Laboratory. There are no known uses for fermium outside of research.
Fermium has 17 known radioisotopes, with the most stable being fermium-257 with a half-life of 100.5 days. The rest have half-lives of 3 days or less, with a majority of those with half-lives less than 3 minutes. Fermium has 1 meta state. The isotopes of fermium range in atomic weight from 242.073 (fermium-242) to 259.101 (fermium-259).
Photo Copyright and Credit