What is Gore-Tex? • Earth.com 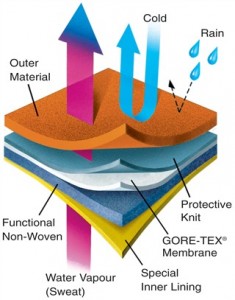 Registered to W. L. Gore, Gore-Tex is a waterproof/breathable fabric that was co-invented by Wilbert L. Gore and Rowena Taylor. In 1976, Robert Gore was granted a patent for a porous form of polytetrafluoroethylene with a micro-structure characterized by nodes interconnected by fibrils. Gore was inducted into the National Inventors Hall of Fame in 2006.

PTFE is created by using an emulsion polymerization process that utilizes the fluorosurfactant PFOA. Gore-Tex materials are typically based on thermo-mechanically expanded polytetrafluoroethylene.

It used in a wide variety of applications such as:

Gore-Tex is known for its protective rain wear.

The basic rain wear consists of two layers where the outer layer is typically nylon or polyester which provides strength. The inner layer is polyurethane and provides water resistance at the cost of breathability.

The early designs of Gore-Tex fabric use a porous fluoropolymer membrane as the inner later that was bonded to a fabric. This membrane had around 9 billion pores per square inch. The pores are smaller than water droplets and are impenetrable to liquid. This Teflon membrane was layer found to be easily damaged when exposed. This resulted in a third layer being added. Lastly a loose fabric shell is added to the garment in order to protect the sandwich membrane although this design has been criticized for reduced performance.

Vent and Epic avoid the need for inner PU coating and have been shown to have better breathability while still being rainproof. Dirt and even human sweat can block the pores that allow breathability in the Gore-Tex and should therefore be kept as clean as possible for performance reasons. Through cleaning and normal use the Durable Water Repellent treatment on the surface of the fabric can be reduced. Gore-Tex requires that all garments made of their material have taping over the seams to eliminate leaks. The Windstopper, Gore’s sister product, is similar to Gore-Tex yet it is windproof and breathable although not waterproof.