What is Hard Rime? • Earth.com 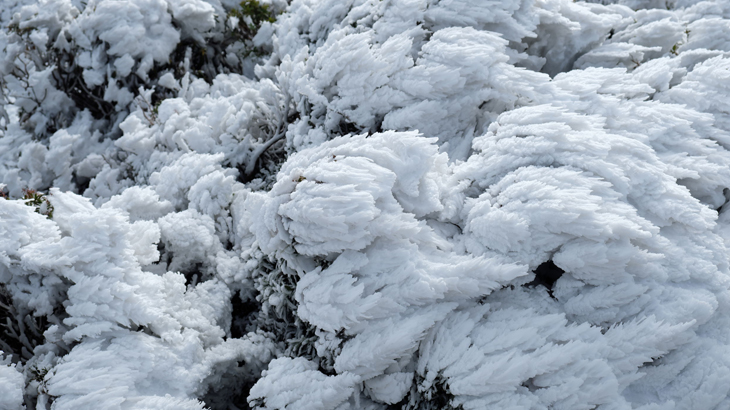 What is Hard Rime?

Hard rime is a white colored ice caused by water droplets in fog freezing to the outer surfaces of objects. It occurs when low clouds cause freezing fog, and can be found on trees, atop mountains and high ridges in winter. This fog freezes along the windward (facing the wind) sides of trees, buildings, and other solid objects. High winds are usually an accompaniment to its formation. The air temperature required is typically between 17°F and 29ºF.

Hard rime has a comb-like appearance, unlike soft rime which looks more feathery or spiky. Hard rime is also very dense and less milky in color than soft rime. Typically, the quantity of water droplets that have super-cooled (when a liquid’s temperature is brought below 0ºC without solidifying or crystallizing) determines the type of ice that forms. The more water droplets found in ice, the denser it becomes. Hard rime often has less water droplets and more ice crystals.

In some extreme weather regions such as Mount Washington in New Hampshire, scientists at the meteorological observatory often break huge chunks of hard rime off of their equipment to keep them from malfunctioning. Rime ice also accumulates on the leading edges of aircrafts as they fly through extremely cold weather conditions. Hard rime build up is said to be the cause of the Continental Connection (flight 3407) plane crash on February 12th, 2009.