What is Muscle? • Earth.com 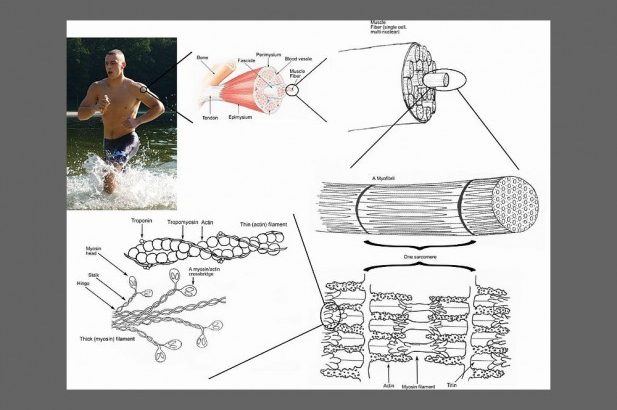 Muscles are soft tissues that is filled with protein filaments that manipulates the shape of a cell which can help with posture, movement and functions of other organs in the body such as the lungs and heart as well as the digestive tract.

Formation and Orientation of the muscles

There are three different types of muscle tissues; skeletal, smooth and cardiac muscles.

Skeletal muscle is used to hold together and monitor skeletal movements. Posture is mainly controlled by skeletal muscles located along the spine. These muscles are attached by tendons to bone. This type can be divided into two broad types; slow twitch and fast twitch. Slow twitch contract long and dull while fast twitch muscles contract rapidly and in short bursts. Skeletal muscle is encased by tough tissues called epimysium which holds the muscle to the tendons. This also protects muscle from harmful friction caused by muscles and bones.

Smooth muscle is the muscle most commonly found on the inside linings of organs and in the skin as well. This muscle, unlike skeletal muscle, is not controlled by the conscious mind.

Cardiac muscle is the final type of muscle that is also an involuntary muscle like smooth muscle. It is found only in the heart as cardiac translates to heart. Cardiac and skeletal muscles also have something in common, this being that they both contain sacromeres which are the muscular protein cells that slide past each other as muscles contract.

During human development, muscle progenitor cells either move to the vertebral column or go towards making up muscle in other organs of the body. Then the formation of connective tissue that holds the muscles in place begins. The skeletal system is used in movement and electrical impulses.

To maintain muscles, energy must be consumed in order to keep up with the forces that muscles exert. Muscles also conserve energy as it is shown in the form of creatine phosphate which comes from adenosine triphosphate (ATP). Glucose is also stored in the form of glycogen in muscles. When in need of strength and power, glycogen can be turned into glucose as a source of power to fuel muscles. Glycolysis is the process in which glucose is metabolized for energy.

Muscles play an extremely important role in creating movement, establishing posture, steadying joints, circulating blood and creating heat. When muscles are pulled on by the tendons in joints of bones, posture can be trained and certain muscles can be built up to produce movement. Stability is achieved by muscles and their forces on joints where muscles limit movements or balance movements. The contraction of muscles helps to maintain homeostasis with the dilation of blood vessel. With blood circulation, muscles produce chemicals that cause arteries to dilate and regulate the blood flow required for the output being done.