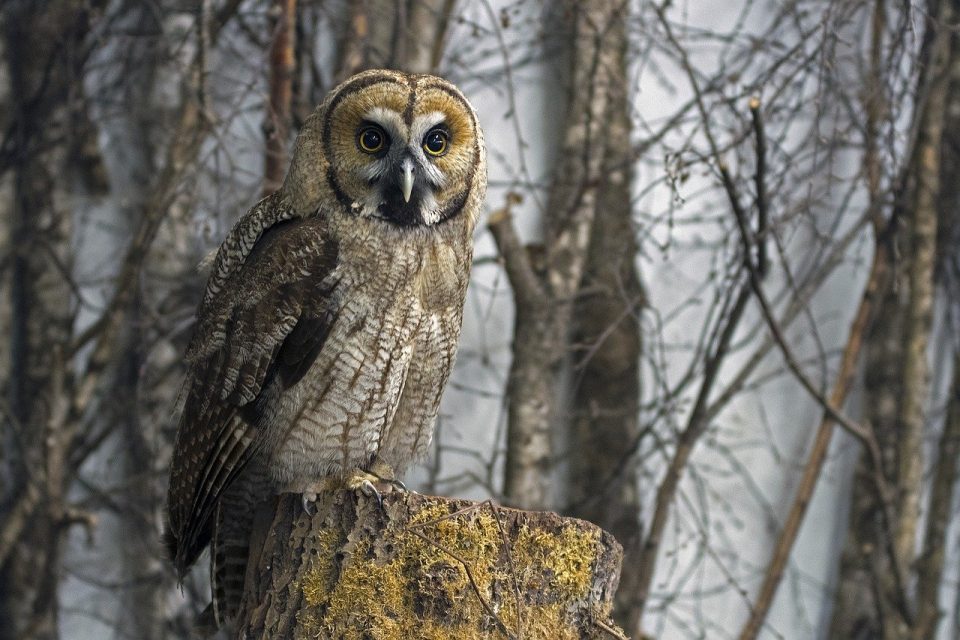 Mysterious Creatures of the Taiga Biome

Frigid temperatures, dense coniferous forests, and cold winters are all common features of the taiga biome. Much of the world’s land is covered by this frozen biome and many fascinating, uncommon animals make their home here. Even though the taiga is such an important ecosystem in the northern hemisphere, not much is said about this forest biome, and many of the animals that live here seem completely mysterious. Here’s some information about what the taiga actually is, where you can find it, and the kinds of plants and animals you can find there.

What Is the Taiga Biome?

Taiga biomes are the dense, evergreen forests of high latitudes in the northern hemisphere. In Canada and the US, the term “boreal forest” often replaces “taiga”; the two are actually the same biome. Whatever the name, these forests occur in subarctic regions, just below the arctic circle. Because of the massive amount of land the taiga covers, it is considered the world’s largest terrestrial biome. In fact, taiga covers 17 million square kilometers (6.6 million square miles) on three continents! Taiga is also one of the newest ecosystems in the world. Before 12,000 years ago, during the last ice age, all of the world’s land that is now taiga was underneath miles of ice. After the ice retreated, plants began to colonize the new real estate. Now, it is covered in dense forests.

In general, the taiga is characterized by a very cold climate. It is the third coldest biome on earth, after the tundra biome and permanent ice caps. Average temperatures through the year range from -5 to 5 °C (23 to 41 °F), depending on location. But, the temperature range from the summer and winter months is huge. During the summer, a normal temperature would be 18 °C (64 °F). In contrast, a winter day would be closer to -20 °C (-4 °F). Temperatures in the Siberian taiga can easily get down to -50 °C (-58 °F) during the coldest part of the year! These frigid temperatures mean that animals adapted to taiga biomes can survive in subzero temperatures for much of the year.

Precipitation in the taiga is low. On average, precipitation is from 200-750 mm (7.9-29.5 in) per year. Most of the precipitation comes as snow which can stay on the ground for months until summer temperatures cause it to melt. However, in the coldest and northernmost regions, precipitation can persist and create permafrost. Fog is the other most important type of precipitation in taiga biomes, which helps trees reach their largest sizes, especially in coastal regions.

Where Is the Taiga Biome?

You can find the taiga on two gigantic landmasses – North America and Eurasia. The country that has the most taiga is Russia, followed by Canada, and the United States. Taiga in Russia occurs in the vast region of Siberia – one of the most expansive and unpopulated places on earth. In Canada, the taiga occurs north of temperate deciduous forests in the east, and as an extension of evergreen forests in the west. Canada also has the most national parks in taiga biomes. Other countries have taiga, albeit much less, including the Scandinavian countries of Norway, Finland, and Sweden. Taiga occurs between 50°N and 70°N, and most of it is immediately below the arctic circle.

The taiga is home to many plants that are adapted to cold temperatures and a short growing season. Because North America and Asia used to be connected via the Bering land bridge, both of these continents share many of the same species. The short growing season and oblique sunlight greatly limit photosynthesis in the taiga. In general, the taiga is dominated by evergreen conifers. The coniferous trees that show up the most are spruce, pine, and larch. Many deciduous trees are present as well, such as birch, alder, willow, and poplar. Despite the presence of these trees, deciduous forests are less common than evergreen forests in the taiga. The diversity and species assemblages change depending on the region. Some have mixed stands containing a few species, while others are dominated by a single species.

One of the most common trees in the taiga occurs in easter Siberia. The Dahurian larch (Larix gmelinii) is an incredibly widespread tree, spanning from eastern Siberia, to Mongolia, northeastern China, and North Korea. In the taiga, the Dahurian larch experiences some of the coldest temperatures the taiga has to offer. It’s also a unique conifer in that it’s actually deciduous, dropping its needles in the fall to withstand the cold, dry winter.

In Canada and the US, the taiga is full of evergreen trees like balsam fir (Abies balsamea), black spruce (Picea mariana), tamarack larch (Larix laricina), and hemlock (Tsuga spp.). Groundcover includes various wildflowers and shrubs. Lichen is also abundant in the taiga, along with mosses and other bryophytes, and mushrooms like morels.

Animals Of the Taiga Biome

Many mysterious creatures make their home in the taiga. Due to the cold temperatures, all of the animals that live in this biome must be adapted to frigid conditions in one way or another. Many of the following animals are pretty common, but some are truly enigmatic inhabitants of the taiga biome.

Siberian tigers are one of the most endangered big cats in the world. They’re also the world’s largest cat, growing to be a whopping 300 kilos (660 pounds) and 3 meters (10 feet) long. These huge, top predators are incredibly important animals in the taiga. They occur primarily in eastern Siberia, but some make it down to northern China and North Korea. Thanks to the low human population of eastern Siberia, these tigers are well protected from threats in the Russian taiga. Still, humans pose a great threat to these animals through poaching and habitat destruction.

In the summer, the taiga is rich in birds. Most, however, vacate the taiga towards the end of summer and migrate somewhere warmer. The crossbill is one of those brave birds that decide to stay in the taiga during summer. They have distinctive, crossed beaks (hence their name) which allow them to pry open cones to eat the enclosed seeds. Their beak grants them the ability to survive in the taiga during the winter months when most other birds would be helpless.

Not many amphibians live in the taiga thanks to its cold, snowy winter and short summers. The boreal chorus frog is one of them and seems to thrive in this unforgiving biome. This tiny frog species is native to central Canada and makes its home not only in taiga but further north in the tundra, too. They are tiny frogs, measuring at most 4 cm (1.5 inches) in length. In the winter, they hibernate underneath the deep snow. However, in the spring, they emerge from their slumber and begin to breed. A breeding population of boreal chorus frogs erupts in loud, prolonged calls that echo through the taiga.

Great gray owls live mainly in the taiga biome of North America, Scandinavia, and Russia. Like all owls, they are efficient hunters, catching prey silently and effortlessly amongst dense trees. They aren’t the largest owl species, but they are one of the largest birds in the taiga. Their hearing is so sharp, they are able to pinpoint the location of prey even under deep snow.

Lynx are elusive, predatory cats with characteristic pointed ears. There are four species, two of which live in the taiga – the Canada lynx in Canada and Alaska, and the Eurasian lynx in northern Europe and Asia. These mysterious animals hunt small to medium mammals like snowshoe hares and minks, but some are brave enough to even hunt deer.

Wolverines are part of a group of animals called mustelids, which make up the family Mustelidae. Minks, martens, otters, stoats, and weasels are all different types of mustelids, but the wolverine might just be the most mysterious mustelid. The wolverine is one of the largest species in the family and is renowned for its ferocity and strength. Wolverines mainly scavenge for their food but are capable of hunting live prey. Thanks to their brazen attitude, they can take on prey much larger than themselves, such as deer.

Another member of the mustelid family, martens are much smaller than their wolverine cousins. Like many members of this family, the American marten is entirely opportunistic, feeding on pretty much whatever it wants whenever it is available. Their diet is highly dependent on the seasons, eating fruit, fish, foliage, insects, and small rodents whenever each food item is most abundant.

Moose are some of the largest animals in the taiga, even compared to bears and tigers. These truly massive animals live all throughout the taiga – from eastern Canada to Alaska, and across the water from Siberia to Scandinavia. Despite their size, moose are still prey for top predators like tigers and wolves. They are also important herbivores, eating even woody stems of plants during the winter when no fresh, green leaves are present.

Salmon are keystone species in the taiga. These biomes often host countless rivers and streams, which salmon return to in order to spawn. As the salmon make their way upstream, many animals intercept the swimming creatures for a nutritious meal. Even though many salmon won’t make it to their ultimate spawning grounds, hundreds do. After the salmon spawn, they die. Dying salmon make an incredibly important food resource for countless animals such as bears and wolves, and the carcasses of the fish provide nutrients for scavengers like ravens and wolverines. This yearly influx of salmon makes them some of the most important species in the ecology of the taiga.

Mosquitoes are some of the most hated animals on earth – and also the deadliest thanks to the diseases they help spread. In the taiga biome, they are abundant. In Alaska alone, there are more than 30 species of mosquitoes. During the relatively warm summer months, mosquito populations explode. Even though their presence is unwelcome to many mammals like caribou, they are a vital food resource for birds and amphibians like frogs. Their sheer abundance alone gives rise to the argument that mosquitoes, like salmon, are keystone species in the taiga.