What is Proterozoic? • Earth.com 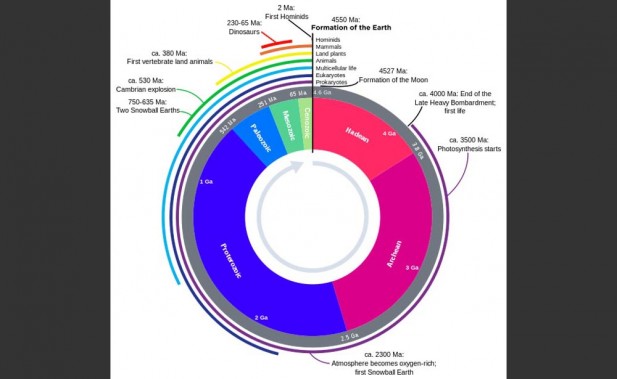 It is meaning earlier life, is a geologic eon that follows the Archean. It represents the time just before the proliferation of complex life on Earth. This time period extended from 2.5 billion years ago (Ga) to 542 million years ago (Ma or Mya). It is the most recent eon within the Precambrian period, which includes the Hadean, the Archean, and the Proterozoic eons.

The Proterozoic is itself also divided into three sub-geologic eras (from oldest to youngest):

The Proterozoic Eon is known for hosting the transition to an oxygenated atmosphere. It came during the Mesoproterozoic, and several glaciations during the Neoproterozoic. During the late stages of the Proterozoic, from 635 to 542 mya, the evolution of abundant soft-bodied multicultural organisms occurred. This period is known as the Ediacaran Period.

Study of geologic rocks in the Proterozoic eon showed that the massive continental accretion that begun in the late Archean had continued into the Proterozoic. The first known glaciations occurred during this eon, with one early incidence in the eon. They may be four during the Neoproterozoic, climaxing with the Snowball Earth theory of the Sturtian and Marinoan glaciations.

During this period, one of the planet’s most important events occurred: gathering of oxygen in the Earth’s atmosphere. Though photosynthesis during the Archean was responsible for some release of oxygen, it was not able to build up at a significant rate. When the Proterozoic began, the oxygen levels were only 1 to 2 percent of the levels in today’s atmosphere. Adding weight to this scenario is the fact that geologists find no record of oxygen stores in hematite (iron oxide) found in rocks older than 2 billion years old.

During the Proterozoic (from about 1000–830 Mya) most of the continental mass was united as the supercontinent Rodinia. Rodinia formed by accretion and collision of fragments produced by the breakup of an older supercontinent known as Nuna (Columbia), which was assembled about 2 Ga. This means plate tectonic processes similar to today’s must have been active during the Proterozoic.

After Rodinia broke up around 800 Ma it is hypothesized the continents joined together again around 550 Ma. This hypothetical supercontinent is often referred to as Pannotia or Vendia. This continental collision has been called the Pan-African orogeny. It is believed to be the makeup of the masses of current-day Africa, South America, Antarctica and Australia. However, others doubt this continental collision was a complete supercontinent formation since a continent known as Laurentia had already started breaking off around 610 Ma. At the Proterozoic end, most of the continental mass lay united in a position around the south pole.

Life in the Proterozoic was a large leap from the that of the Archean. The first advanced single-celled organisms (eukaryotes) and multicultural organisms (Francevillian Group Fossils) started popping up with the accumulation of free oxygen in the atmosphere. Some experts believe that free oxygen was due to an increase in the oxidized nitrates that eukaryotes use. It was also during the Proterozoic that the first symbiotic relationships between mitochondria and chloroplasts evolved.

Stromatolites, which were present during the Archean, reached their greatest abundance and diversity during the Proterozoic, peaking about 1200 million years ago. The boundary between the Proterozoic and Phanerozoic eons also show a fine line for when animals fossils (such as trilobites and archeocyathids) started appearing. In the second half of the 20th century, a number of fossil forms have been found in Proterozoic rocks, but the upper boundary of the Proterozoic has remained fixed at the base of the Cambrian, which is currently placed at 542 Ma, at the end of the Proterozoic.