What is the Search for Extra-Terrestrial Intelligence ( SETI )? • Earth.com 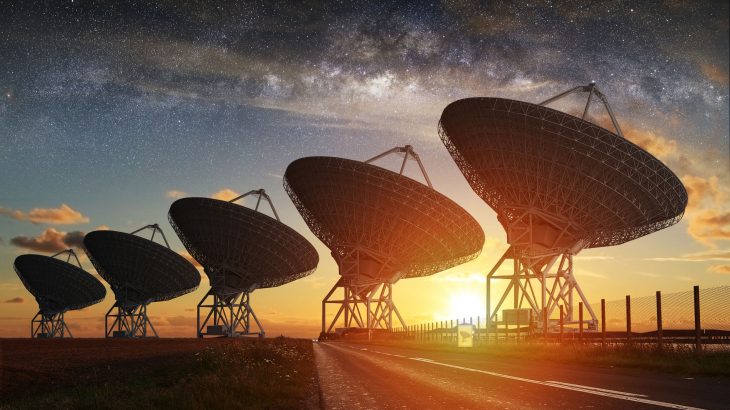 What is the Search for Extra-Terrestrial Intelligence ( SETI )?

Interstellar travel is a common theme in science fiction stories, but the obstacles to such journeys are in practice enormous. An alternative approach to interstellar exploration is to survey the sky in hopes of finding transmissions from a civilization on a distant planet, but such an effort has obstacles as well.

Visiting another civilization on a distant world be fascinating, but at present beyond our capabilities. However, it is perfectly within our capabilities to develop a communications system using a powerful transmitter and a sensitive receiver, and using it to search the sky for for alien worlds whose citizens have a similar inclination.

SETI is still no trivial task. The Milky Way galaxy is 100,000 light years across, and contains a hundred thousand million stars. Searching the entire sky for some faraway and faint signal is an exhausting exercise.
Some simplifying assumptions are useful to reduce the size of the task. One of them ” the vast majority of life-forms in our Earth and galaxy are based on carbon chemistries “. While it is possible that life could be based around atoms other than carbon. Carbon is well known for the unusually wide variety of molecules that can be formed around it.

The presence of liquid water is also a useful assumption, as it is a common molecule and provides an excellent environment for the formation of complicated carbon-based molecules that could eventually lead to the emergence of life.

A third assumption is to focus on Sun-like stars. Very big stars have relatively short lifetimes. This mean that intelligent life would not likely have time to evolve on planets orbiting them. Small stars provide so little heat and warmth that planets in very close orbits around them wouldn’t be frozen solid. In such close orbits these planets would be tidally “locked” to the star, with one side of the planet perpetually baked and the other perpetually frozen.

About 10% of the stars in our galaxy are Sun-like, and there are about a thousand such stars within 100 light-years of our Sun. These stars would be useful primary targets for interstellar listening. However, we only know of one planet where life exists, our own. There is no way to know if any of the simplifying assumptions are correct, and so as a second priority the entire sky must be searched.

Searching the entire sky is bad enough. To find a radio transmission from an alien civilization, we also have to search through most of the radio spectrum. As there is no way to know what frequencies aliens might be using. Trying to transmit a powerful signal over a wide range of wavelengths is impractical. It is likely that such a signal would be transmitted on a relatively narrow band. This means that a wide range of frequencies must be searched at every spatial coordinate of the sky.

There is also the problem of knowing what to listen for, as we have no idea how a signal sent by aliens might be modulated, and how the data transmitted by it encoded. Narrow-bandwidth signals that are stronger than background noise and constant in intensity are obviously interesting, and if they have a regular and complex pulse pattern are likely to be artificial.

However, while studies have been performed on how to send a signal that could be easily decoded, there is no way to know if the assumptions of those studies are valid, and deciphering the information from an alien signal could be very difficult.

There is yet another problem in listening for interstellar radio signals. Cosmic and receiver noise sources impose a threshold to power of signals that we can detect. For us to detect an alien civilization 100 light-years away that is broadcasting “omnidirectionally”, that is, in all directions, the aliens would have to be using a transmitter power equivalent to several thousand times the entire current power-generating capacity of the entire Earth.

It is much more effective in terms of communication to generate a narrow-beam signal whose “effective radiated power” is very high along the path of the beam, but negligible everywhere else. This makes the transmitter power perfectly reasonable, but the problem becomes one of having the good luck to be in the path of the beam.

Such a beam might be very hard to detect, not only because it is very narrow, but because it could be blocked by interstellar dust clouds or garbled by “multipath effects”, the same phenomenon that causes “ghosted” TV images. Such ghosts occur when TV transmissions are bounced off a mountain or other large object, while also arriving at our TV antenna by a shorter, direct route, with the TV picking up two signals separated by a delay.

Similarly, interstellar narrowbeam communications could be bent or “refracted” by interstellar clouds to produce multipath effects that could obscure the signal. If interstellar signals are being transmitted on narrow beams, there is nothing we can do at this end to deal with this problem other than to be alert.

Modern SETI efforts began with a paper written by physicists Giuseppe Cocconi and Philip Morrison and published in the science press in 1959. Cocconi and Morrison suggested that the microwave frequencies between 1 and 10 gigahertz would be best suited for interstellar communications.

Below 1 gigahertz, “synchrotron radiation” emitted from electrons moving in galactic magnetic fields tends to drown out other radio sources. Above 10 gigahertz, radio noise from water and oxygen atoms in our atmosphere tends to also become a source of interference. Even if alien worlds have substantially different atmospheres, quantum noise effects make it difficult to build a receiver that can pick up signals above 100 gigahertz.

The low end of this “microwave window” is particularly attractive for communications, because it is in general easier to generate and receive signals at lower frequency. The lower frequencies are also desireable because of the “Doppler shifting” of a narrow-band signal due to planetary motions.

Cocconi and Morrison suggested that the frequency of 1.420 gigahertz was particularly interesting. This is the frequency emitted by neutral hydrogen. Radio astronomers often search the sky on this frequency to map the great hydrogen clouds in our galaxy. Transmitting a communications signal near this “marker” frequency would improve the chances of its detection by accident. This frequency is sometimes called the “watering hole” by SETI enthusiasts.