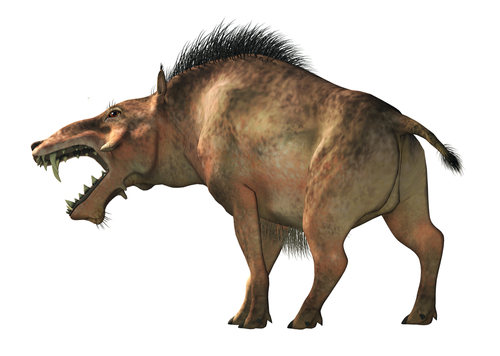 The Terrifying Biology Of Hell Pigs

Ever heard of a hell pig?

Yes, they’re a real thing. At least, they were. While these “terminator pigs” are (thankfully) no longer roaming upon the Earth’s crust, the fossil record tells a riveting story of these gargantuan, scary-looking creatures and also reveals enchanting details of the way the world they inhabited appeared. Today we’re going to rut around in the terrifying biology of hell pigs to better understand the mystifying past of this planet’s evolution and extinction events. So let’s dig in – the facts are quite bristly!

Terrifying Creatures From The Past

Hell pigs, biologically known as entelodonts, are extinct, giant pig-like creatures that roamed the forests and plains of North America and Eurasia. These vertebrates were in existence for 18.2 million years, common in the appropriate regions from the middle Eocene period up until the early Miocene.

Entelodonts are big-bodied, even-toed ungulates. Based on skeletal reconstruction, they had long snouts and slender legs. The largest known skeleton belongs to the North American Daeodon shoshonensis – clocking in at a whopping 6.9 feet tall to the shoulder. Archaeotherium is a species of entelodont that was an endemic species to North America as well, surviving in the great plains and as far south as modern-day texas in the  Eocene and Oligocene epochs – around 35 million years ago.

Entelodont species had full jaws of teeth. And in larger species, they showcased a bison-like hump in order to hold up their large and heavy heads.

These hell pigs have gained a newfound fascination in popular culture due to various documentaries on National Geographic and the BBC, respectively. With the work of CGI and informed, imaginative recreation, these programs can bring images to life for average viewers to better visualize hell pigs. This way, our brains can better comprehend what paleontologists work to describe. It’s no surprise that modern audiences are fascinated with such strange creatures – large, somewhat familiar-looking, but utterly strange and exotic, too.

How These Creatures Survived

So, now that everyone’s excited about these terminator pigs, how is it that these animals lived, thrived, and survived?

Entelodonts are omnivores, meaning they munched on plants like herbivores and snacked on meat like carnivores. Paleontologists can make a lot of inferences from the structure of the animal’s teeth. In the case of hell pigs, their front teeth include heavy incisors and long canines. Their back teeth are flat molars. Due to our understanding of their jawbones and jaw muscles, these beasts could likely open their mouths surprisingly wide – to an angle of perhaps 150 degrees – similar to hippos.

They were most likely “aggressive omnivores” and scavengers. And based on skeletal remains, paleontologists guess that across the landscapes of Europe, North America, Eurasia, and Asia, these creatures consistently used their impressive jaw structure for “yawning” confrontations, biting, and jaw wrestling contests. Additionally, females most likely slammed their heads into their rivals’ bodies.

Tracks of these hell pigs have been preserved in the prehistoric mud of watering holes – preserved through the millennia and now protected by the US Government through the parks system. There’s something poetic about the preserved footsteps of such a terrifying creature – like some sort of riveting echo of the past and a clue the scientists are trying to follow to learn more about them.

Hell Pigs With A Strategy

Researches have identified “meat caches” in Wyoming, attributed to hell pigs based on bite marks consistent with their jaw measurements. The evidence suggests that these creatures would behead their prey and then delve into the meatier, articulated rear halves of their prey. They would then stockpile “articulated thoracic leftovers” in these cashes for later. So not only are these hell pigs big and scary with gaping wide mouths – but they were also quite strategic, from the sounds of it. I don’t know about you, but I’m glad there’s no chance of encountering one of these meat-eating, jaw-crushing creatures on a casual hike, that’s for sure.

These prehistoric eras left evidence of plenty of other terrifying beasts that stalked the floodplains of Nebraska or the steppe of Mongolia, too. For example, living at the same time as entelodonts were nimravid sabertooths and the dreaded “bear-dogs” also known as amphicyonids. These apex predators defined food chains and broader ecosystems.

Why Did The Hell Pigs Go Extinct?

Obviously, hell pigs are no longer with us (though certain pigs and boars could certainly qualify for the title with aggressive behavior), and truly, most animals that have walked the planet already are extinct – a humbling fact to take into consideration. Historically this is due to mass extinctions brought on by extreme natural disasters. Today, of course, we are losing. terrifying levels of key species due to human greed and ignorance. But back to the hell pigs – why did the entelodonts disappear specifically?

Dinohyus hollandi, for example, is one of the larger entelodont species that inhabited the flood planes of Nebraska. Other animals in the region at the time include land beavers and gazelle-like camels. Their fossils are rare in comparison to other contemporary creatures – suggesting that they were not particularly social animals. Indeed, the fractured evidence of most fossilized skulls suggests that violent confrontations between individuals were quite regular. This theory impacts different stages of the animals’ life cycle.

Entelodonts inevitably killed each other in certain situations. But there are a whole host of other environmental factors that most likely led to these species’ extinctions. The discipline of paleontology often works in theory. And since there is so much mystery around these prehistoric eras and what went on in various landscapes. Extinction events can co-inside with warming or cooling temperatures, global disturbances such as volcano eruptions or asteroid collisions. Even diseases and non-adaptive biological traits can impact a species ability to survive.

Mysteries Yet To Be Solved

Humans continue to uncover fossils. These remains will provide answers to how certain creatures lived and died, and perhaps, why they eventually went extinct. In the case of entelodonts, a tooth was uncovered as recently as March 2020. A student in Mississippi found a strange, black-colored rock, that in fact turned out to be a hell pig tooth dating back to “the Oligocene some 26 million years ago”. Remember, you are walking past and moving through prehistoric landscape all the time! There’s no telling what you might find when you know what to look for.

Are They Related To Modern Pigs?

As you may have guessed, it turns out that entelodonts are actually more closely related to hippo. This is true in spite of their common names. However, ungulates are a wide category of creatures. In looking at the composite, hypothesized images of entelodonts, our brains do quickly connect them to animals we know. Examples include pigs, warthogs, hippos, and even rhinos.

A recent study even connects the evolutionary chain of these hell pigs to that of whales. This study led to the forming of the taxonomical clade of Whippomorpha or Cetancodontamorpha. Have you swam down the incredible story that is the evolutionary process of our modern-day, beloved giants of the sea? You may be surprised at the incredible story that scientists pieced together!

Either way, there is still plenty of mystery surrounding entelodonts. The more you learn about these fascinating creatures, the clearer it becomes that these are no true pigs from hell. Actually, they are an incredible piece of our planet’s evolutionary history. They are a glimpse into the depth of transformation that has taken place through natural selection.