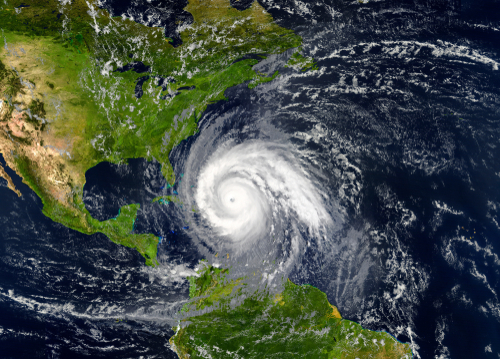 Tsunami vs. Hurricane: What's the Difference?

Hurricanes and tsunamis are two types of powerful natural disasters that can destroy coastal communities overnight. These natural disasters may have similar effects, but the way they are created is very different.

What is a Tsunami?

Tsunamis are a series of ocean waves that are caused by large disturbances to ocean waters. Unlike normal waves, which are caused by wind running across the top of the ocean, tsunamis begin with a large movement of rock through earthquakes, volcanoes, or landslides.

Earthquakes cause tsunamis because they suddenly shift a large area of the seafloor. This disturbance displaces massive amounts of water and introduces energy into the ocean. The displacement and energy creates enormous waves called tsunamis.

Landslides into the ocean also cause tsunamis. Imagine the waves that form from dropping a ball into a pool. Now imagine how big those waves would be if the ball was the size of an entire cliff face falling into the ocean. The splash from such a falling cliff face can cause tsunami-sized waves.

Underwater volcanic explosions can also cause tsunamis by creating underwater landslides and by displacing large amounts of water.

How is a Tsunami Different From a Regular Wave?

Tsunami waves are unlike regular waves. They travel 500 miles per hour, which is as fast as an airplane! This means that a tsunami caused by an earthquake off the coast of South America can hit Japan within 24 hours. Tsunami waves appear as small waves in the open ocean. As tsunamis approach land, they grow in height. Most tsunamis are under 10 feet (3m) high. However, exceptional tsunami waves can be up to 500 feet high at landfall. This type of tsunami looks like a wall of water and is incredibly destructive to coastal areas.

Tsunamis come as a series of waves. These waves usually peak within a few hours of the first wave that makes landfall. Smaller waves can continue for days.

What is a Hurricane?

A hurricane is a massive, powerful storm that begins over the Atlantic ocean in the warm months between June and November. Hurricanes only form over a warm body of water because that warmth acts as fuel for the storm. When the winds of a tropical storm pass 74mph (119kph) they turn into hurricanes. The rotation of the Earth gives momentum to hurricanes, causing the iconic spiral pattern. Interestingly, these mega-storms spin counterclockwise in the northern hemisphere and clockwise in the summer hemisphere due to the spin of the Earth. Scientists break hurricanes into categories of 1-5, with category 5 having the fastest winds of over 157mph.

As with any storm, hurricanes create an area of low pressure underneath them. For strong hurricanes, this area has such low pressure that the ocean water bulges underneath the storm. The lesser pressure means that there is less weight of the atmosphere pushing down on the water, which allows the water to bulge skywards. When the hurricane carries this bulge of water towards land, it is called a storm surge. Hurricanes can carry storm surges far inland, depending on the strength of the storm.

Where do These Natural Disasters Hit?

Tsunamis can occur in any coastal area of the world. The most severe tsunamis usually hit land that borders the Indian Ocean and the North Pacific, around the Ring of Fire. Alaska, Japan, Hawaii, and India experience some of the worst and most frequent tsunamis in the world.

There are three words for the same type of storm that causes a hurricane. Cyclones, hurricanes, and typhoons are all the same thing, just in different areas. In the North Atlantic ocean or the Pacific ocean off of Mexico, the storm is called a hurricane. Areas surrounding the Gulf of Mexico, such as Florida and the Caribbean, often get hit by hurricanes.

Typhoons are the same as hurricanes, but they form in the western Pacific ocean. Typhoons hit the Pacific side of Southeast Asia and Oceania. Tropical storms in the Indian Ocean are called cyclones. These storms wreak havoc on countries like India and Bangladesh.

Southern Asia and Indonesia are unfortunately in the path of both tropical cyclones and tsunamis.

Is a Tsunami or Hurricane More Destructive?

Tsunamis and hurricanes can both be incredibly destructive to coastal areas. The terrifying Boxing Day tsunami on December 26th, 2004 killed over 230,000 people in 14 countries around the Indian Ocean. The waves from this tsunami reached 100 feet high and ravaged communities through incredible flooding and force.

Severe tropical storms can be similarly destructive. The Bhola cyclone that hit Bangladesh in 1970 killed over half a million people. It flooded huge areas of the low-lying, heavily populated Ganges river delta.

While tsunamis like the Boxing Day tsunami are incredibly deadly, the majority of tsunamis do not end up killing that many people. With proper warning systems, people can usually find higher ground to avoid death by tsunami. From 1998-2017, tsunamis killed about 250,000 people around the world (most of which were in the Boxing Day tsunami). Hurricanes, cyclones, and typhoons are more deadly on average. In the 20th century, these storms killed about 2 million people worldwide. These tropical storms are not so easy to outrun. In addition to causing flooding by waves, tropical storms cause inland flooding with heavy rain and further destruction with high winds.

However, both tsunamis and tropical storms can impact millions of people at once. The most important aspect to the destructiveness of these natural disasters is where they hit. If a tsunami hits an ocean bluff that is 100 feet high with few people living on it, it will be orders of magnitude less destructive than smaller tsunami that hits a heavily populated, low-lying area.

As humans continue to build in coastal areas, we increase our expposure to natural disasters such as hurricanes and tsunamis. Rising sea levels from climate change amplify storm surges, causing worse flooding. Climate change also fuels stronger and more frequent hurricanes. As we move into the future, adapting to these natural disasters will be increasingly difficult the warmer our planet becomes.