What is Urban Heat Island? • Earth.com 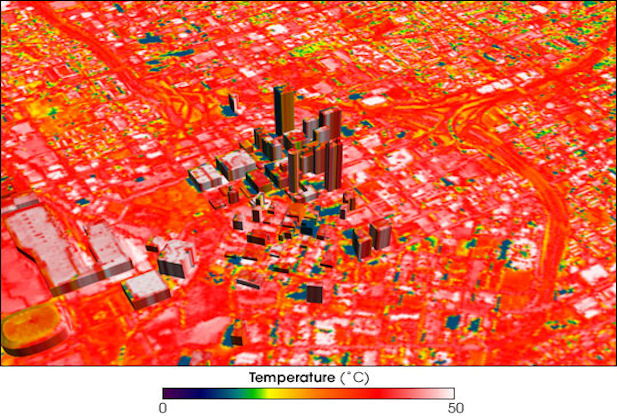 What is Urban Heat Island?

(UHI) is a metropolitan area that is drastically warmer than its surrounding rural areas because of human activities. The phenomenon was first looked into and described by Luke Howard during the 1810s, although he wasn’t the one to name the phenomenon. The difference in temperature is normally bigger at night as opposed to during the day, and it most obvious when winds are weak. Seasonally, UHI is seen during the summer and the winter.

The key cause of the urban heat island is modification of the land surface by urban development which utilizes materials which effectively keep hold of heat. Waste heat produced by energy usage is a secondary contributor. As a population center grows, it has a tendency to enlarge its area, and increase in its mean temperature. The less-used term heat island is in reference to any area, populated or not, which is consistently hotter than the surrounding area.

The monthly rainfall is greater downwind of cities, partly because of the UHI. The increase in heat within urban centers increases the length of growing seasons, and decreases the occurrence of weak tornadoes. The UHI decreases air quality by increasing the production of pollutants such as ozone, and decreases the water quality as warmer waters flow into area streams, which stresses their ecosystems.

Not all cities have a characteristic urban heat island. Mitigation of the urban heat island effect can be achieved through the use of green roofs and the usage of lighter colored surfaces within urban areas, which reflect more sunlight and absorb less heat.

Despite the concerns that were raised about its possible contribution to global warming, comparisons between the urban and rural areas show that the urban heat islands effects have little influence on global mean temperature trends.

There are quite a few causes of an urban heat island (UHI). The major reason for the warming during the night is that buildings block surface heat from radiating into the fairly cold night sky. Two other reasons are changes in the thermal properties of surface materials and a lack of evapotranspiration within urban areas. Some materials that are commonly used for pavement and roofs, like concrete and asphalt, have considerably different thermal bulk properties and surface radiative properties than the bordering rural areas. This initiates a change in the energy balance of the urban area, frequently leading to higher temperatures than the bordering rural areas.

Other causes of a UHI are due to geometric effects. The tall buildings located in many urban areas offer multiple surfaces for the reflection and absorption of sunlight, increasing the efficiency with which urban areas are heated. This is known as the urban canyon effect. Another effect of the buildings is the blocking of wind, which inhibits cooling by convection as well. Waste heat from automobiles, industry, air conditioning, and other sources contribute to the UHI also. High pollution levels within the urban areas can increase the UHI too, as many types of pollution change the radiative properties of the atmosphere.

Some cities display a heat island effect largely during the night. Seasonally, UHI shows up in the summer as well as in the winter. The usual temperature difference is several degrees between the middle of the city and the surrounding fields. The difference in the temperature between an inner city and its surrounding suburbs is often mentioned in the weather reports, as in 68 degrees Fahrenheit downtown, 64 degrees Fahrenheit in the suburbs. Black surfaces absorb drastically more electromagnetic radiation, and results in the surfaces of the asphalt roads and highways to heat.

Aside from the effects on the temperature, UHIs can create secondary effects on local meteorology, including the changing of :

The extra heat produced by the UHI leads to greater upward motion, which can stimulate additional shower and thunderstorm activity. Additionally, the UHI generates during the day a local low pressure area where considerably moist air from its rural surroundings meets, potentially leading to a more favorable condition for the formation of clouds. The rates of rainfall downwind of cities are increased between 48 percent and 116 percent. Partially as a result of this warming, monthly rainfall is around 28 percent greater between 20 miles to 40 miles downwind of the cities, contrasted with upwind. A few cities illustrate a total precipitation increase of 51 percent.

UHIs also have the potential to directly influence the health and the welfare of urban residents. Within the United States alone, a mean of 1,000 people die per year because of extreme heat. As UHIs are distinguished by increased temperature. They can possibly increase the magnitude and the duration of heat waves within the cities. Some research has found that the mortality rate during a heat wave increases exponentially with the maximum temperature, an effect that’s intensified by the UHI. The nighttime effect of UHIs can be especially harmful during a heat wave, as it robs the residents of the cool relief that’s found in rural areas during the night.