Venomous vs. Poisonous, What's the Difference? (Hint: They'll Both Kill You) • Earth.com 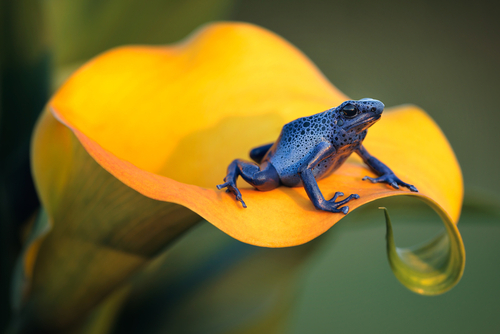 Venomous vs. Poisonous, What's the Difference? (Hint: They'll Both Kill You)

The animal kingdom of Planet Earth is a wild and wondrous place – but it is often a dart or sting away from danger. We’ve all heard stories, and perhaps lived the realities, of encountering poisonous animals, venomous creatures, and monstrous organisms. These creatures dominate folklore, pop culture, horror stories, and even experimental medical treatments and spiritual practices. It is a bubbling cauldron of toxic possibilities and necessary caution.

However, the terms venomous and poisonous are often thrown about quite casually – and interchangeably. This leads to confusion and misunderstanding – and to stay safe, it’s important to stay informed, too.

Today we’re taking a look at the definitions of venomous and poisonous – where they overlap and how they differ. We’re going to look at what happens with venom and poison to cause fatal results in the bodies of ill-fated, curious passers-by, and focus on some examples of harrowing venomous, poisonous organisms that enchant, mystify, and frighten most people (and inspire others). We’ll also look briefly at certain scientific theories and medicinal breakthroughs that have occurred in our societies in conjunction with an ever-deepening understanding of poison, venom, and the animals that wield these strategies of survival.

To understand these terms, it’s important to define them.

According to the Merriam-Webster Dictionary, venomous animals are “capable of putting poison or venom into another animal’s body usually by biting or stinging it · containing venom”.

Comparatively, “poisonous” is defined as “a substance that can cause people or animals to die or to become very sick if it gets into their bodies especially by being swallowed”.

So, in summation, biologists (as well as online dictionaries) identify venomous creatures as those that bite or sting to inject their toxins. Poisonous organisms, on the other hand, are those that unload toxins when consumed or absorbed. Here are some examples: a scorpion and a box jelly are venomous. Some species of mushrooms,  pufferfish, and poison ivy are poisonous and should not be consumed in most instances (pufferfish being an exception and a regional delicacy).

Both poison and venom are powerful defense mechanisms that animals utilize to their own benefit of survival – whether they are coming from a perfectly poised stinger or upon arrival at the insides of an unsuspecting digestive system. These categories can be fluid in the sense that what might be deadly toxic to humans might not be the case for another animal and vice-versa.

Venomous vs Poisonous: Where In Nature To Be Aware

Poisonous and venomous organisms are found all over the planet, in various ecosystems and biomes. Some parts of the world are more infamous than others as far as threats to look out for: Australia, equatorial jungles, and the ocean are hot spots that take up a lot of space in our venom-wary imagination in this regard.

Snakes will send a shiver up most people’s spine – especially when encountering one unexpectedly. In certain parts of the world, this can be a really dangerous moment. Venomous snakes and poisonous snakes (there are both) can cause serious injury and even death, depending on the species of snake. Some of these species of epic legend and lore include vipers, Asian tiger snakes, black mambas, and rattlesnakes.

If you happen to encounter a venomous snake (or a species you have yet to identify), safety experts recommend remaining calm and not disturbing the snake – give it a safe distance and an area to take cover in. Pay close attention to the colors and markings of the snake in order to later identify it (this could be lifesaving if bitten). Never try to handle or remove a snake yourself if you cannot identify it or know it to be a venomous snake. Contact a professional and keep children and animals well away from the area. Snakebites kill over 100,000 people each year and may have evolved independently over 100 times.

Snake venom inflicts death on humans and other animals – but it also “can also be used for the treatment of thrombosis, arthritis, cancer and many other diseases.” Snake venom is now considered a valuable therapeutic tool in the medical field.

There are also snakes that are not venomous, but poisonous –  such as garter snakes. These snakes, as long as you don’t cook them up and eat them, can be an exciting animal-life encounter devoid of concern for venomous bites – and a teachable moment in that some animals that move in unnerving ways are critical elements of a healthy ecosystem.

Certain species of frogs are commonly known as “poisonous” amphibians – especially poison dart frogs whose bright colors have made for some memorable conservation campaigns. Their vibrant appearance also serves as a warning to those who should encounter one – do not touch. They live in the tropical forests of central and South America. Similar to the monarch butterfly, these amphibians have toxic secretions due to their plant diet.

There are some species of poisonous toads as well. The larger the toad, the bigger the gland that excretes toxins. In North America, these poisonous toad species include the cane or marine toad (Bufo marinus) and the Colorado River toad (Bufo alvarius). This is less of a concern for us (not many people munch on toads) and more something to watch for in domestic pets.

There are between 6 and 10 million species of insects on the planet. Bees, ants, and wasps are just a few examples of venomous species – even though they don’t have fangs.

There are other, less obvious insect critters with sometimes venomous intent – like stinging caterpillars. A study from Kentucky explains that these venomous crawlers can cause anywhere from “a mild itching to the more severe pain, swelling, blistering, dermatitis, and even intestinal disturbances.”

Even the monarch butterfly is a venomous species! This is due to the plant these insects consume – milkweed.  The milkweed plant creates toxic substances called “glycosides” – a defense mechanism that the migrating butterflies have evolved to withstand and depend upon. A bird that decides to take a bite out of those orange and black wings will get sick, though likely not die.

Poisonous Organisms Of The Ocean

Of course, venomous and poisonous are not exclusively land-dwelling. There is plenty to worry about in the salty waves of the ocean that cover about 71% of the earth’s surface area.

Jellyfish are particularly notorious for their venomous stinging tentacles. Some stings are light and irritating, others extremely painful and temporarily debilitating. In the case of the box jellyfish, a sting is lethal. According to NOAA, they are the most venomous marine animal.

Sting Rays – named for their stinging tails – are generally regarded as gentle creatures in the water that blend in very well with the coloring of the seafloor. Generally, they only sting when disturbed or stepped on. They can grow up to 6.5 feet long. In 2006, the beloved “crocodile hunter” Steve Irwin was killed by a stingray – which sent shock waves around the globe and left many heartbroken. This sort of attack is extremely rare, however. Sting Rays are much more likely to flit away than to fight.

Pufferfish, blowfish, or any other members of the Tetraodontidae family are fish, considered some of the most toxic vertebrates on earth. Many of these species contain tetrodotoxin – a highly toxic poison, though certain species are also considered a delicacy in Japan as well. What’s dinner without a little danger? This delicacy is catching on in western countries now, and not without some risks.

A Poisonous Take Away

Let’s conclude with an important note: as human development continues and wild spaces become more contained and constricted, our interactions with wildlife can become more deadly. Our societies continue to encroach and decimate the habitats of wildlife – and the call to change course has never been more urgent. In reflecting on our relationships within an ecosystem and the important role that all species play within them, we might illuminate a healthy respect and regard for the animals with which we share this planet – even the really scary ones that can kill us.