What is a Watershed? Am I In One? • Earth.com 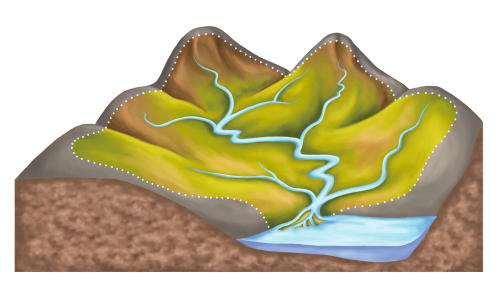 What is a Watershed? Am I In One?

Everyone lives in a watershed and everyone’s drinking water comes from a watershed, so it is important to know a little something about this exciting concept.

What is a Watershed?

Bonus: can you figure out what watershed your tap water comes from?

John Wesley Powell, the first person to lead a boat trip down the entire Grand Canyon, was a scholar of the American West in the late 1800s. He wanted western states’ boundaries to be the boundaries between watersheds. He thought that this arrangement would result in better water management in a generally arid landscape. Unfortunately for the watersheds, Powell’s idea was not adopted. The northern border between Idaho and Montana follows a watershed boundary, but that’s it! While the borders between California and Arizona are the Colorado River, that is not a boundary between two watersheds. Rather, that border just splits one watershed up.

Dividing arid watersheds between populous states has created immense difficulties. The Colorado River now faces huge water problems between the seven states that compose its watershed. In short, each state has overclaimed how much water it can draw from the river. When added up, the total amount of water allowed to be drawn between the seven states is about twice the annual discharge of the entire river. Utah, Colorado, Arizona, California, New Mexico, Nevada, and Wyoming now must make tough choices about how to divide up a resource that is much smaller than any of them planned for. Had politicians followed Powell’s guidance, perhaps the management of water resources like the Colorado would make more sense.

What Affects How Much Water a Watershed Produces?

Many factors influence the volume of water that exits a watershed. Some very small watersheds produce copious amounts of water. The Elwah river on the Olympic Peninsula in Washington state discharges an average of 1500 cubic feet of water per second. A cubic foot is about the same size as a basketball. The Elwah’s watershed is just 320 square miles, or about the area of New York City. In contrast, the Little Colorado River watershed, which drains northeastern Arizona, has a flow of just 432 cubic feet per second even though it drains over 25,000 square miles of land! That means the Elwah watershed produces almost 300 times more water per acre than the Little Colorado. Why is the Elwah so much more productive than the Little Colorado?

One obvious factor that impacts this difference is a drastic difference in precipitation. The Little Colorado drains arid, desert lands, while the Elwah drains lush rainforests. Land area is another basic factor in watershed productivity. A watershed with a larger area and the same annual precipitation will discharge more water than one with a smaller area.

However, precipitation and the area of the watershed are not the only factors that impact the productivity of a watershed.

Infiltration is the ability of water to sink into soil and aquifers rather than running off into rivers. Soil, vegetation, and rock composition all affect the infiltration capacity of the land. More vegetation, for example, will slow water down as it moves across the landscape. This slower-moving water is more able to seep into the ground. If the geology allows, this water can eventually seep into underground aquifers instead of running out to the sea. The easier it is for water to infiltrate the soil, the less water makes it to a river.

Evaporation is when water changes from a liquid to a gas. If it is hot outside, water is more likely to evaporate into the air. When rain evaporates on the land, it doesn’t run into rivers.

Transpiration happens when plants use water as they photosynthesize. When plants use water, they subtract the water they use from the discharge of the river of the watershed they are in (with some cool exceptions, like how the Amazon creates its own rain).

Water Use by Humans

Human uses of water change how much water flows through a watershed. In water-rich areas, the water use by humans is minimal compared to the water nature provides. However, in drier regions, rivers are usually used heavily. The Colorado river is utilized so much that it fails to reach the ocean. Humans take every drop out of the Colorado until there is no river left. Most of the human water use is for animal agriculture, crop agriculture, and industrial applications. A small amount of human water use is done by individuals. In California, a very populous state, urban areas use only 20% of human water use in the state.

Another major human alteration to watersheds is dams. Nearly every river has a dam on it, and most rivers have multiple dams on them. There are almost 100,000 dams in the U.S. alone! Dams regulate the flow of rivers, typically to be more predictable than the flow would be otherwise. The reservoirs created by dams change the character of a watershed immensely.

Humans have fundamentally altered some watersheds, such as the Owens River in California. Historically, the Owens river drained into an inland lake on the eastern side of the Sierra Nevada. In the early 1900s, Los Angeles built an aqueduct to transport the Owens river to satisfy Los Angeles’ growing water needs.

Urban areas drastically change watersheds, also. Humans replace soil with square miles of hard surfaces, like concrete and asphalt. When it rains on these surfaces, the water that would’ve soaked into the ground instead runs across parking lots, streets, sidewalks, and basketball courts towards storm drains, sewers, or river channels. These storm drains, along with stormwater runoff, carry urban pollution to creeks, rivers, and the ocean. Cities are trying to reduce the problems associated with impervious surfaces, such as concrete, by creating rain swales, making more parks, and educating the public about storm drains.

Since watersheds concentrate water to a single point, watersheds also concentrate any pollution that water carries to that single point. Often, fertilizers, pesticides, and sediment from agricultural fields runoff into rivers. This runoff causes all sorts of environmental issues. Government agencies monitor water quality and use that quality as an indicator of watershed health.

Water is the building block of all life. If deserves your attention. If you’re interested in watersheds, there’s no lack of material. There are so many interesting books, articles, videos, and podcasts about watersheds and how humans use water. Learning about your own watershed it one of the best ways to become connected to the place you live.