What Is the Hadal Zone? • Earthpedia • Earth.com 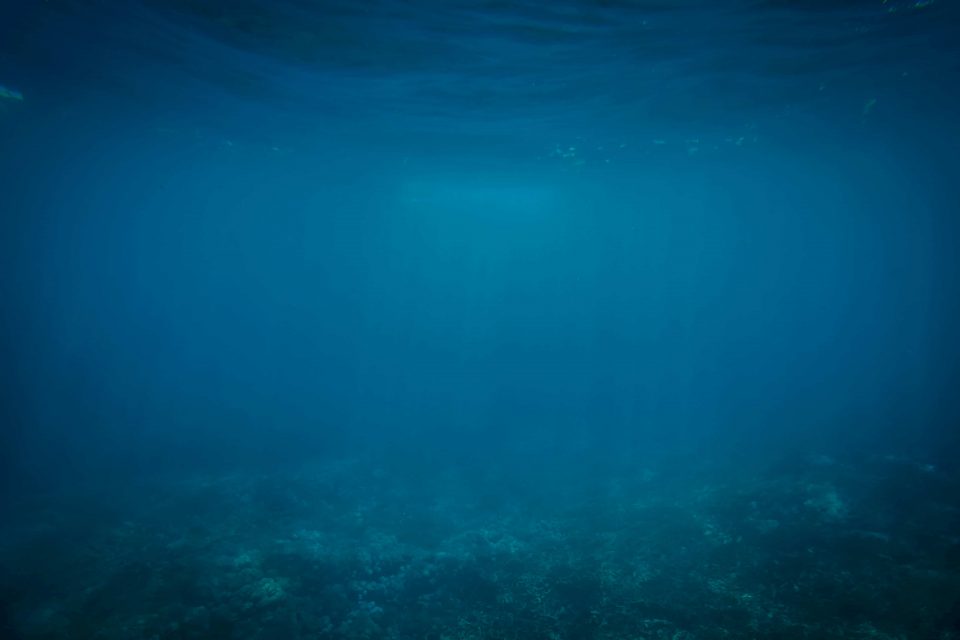 What Is the Hadal Zone?

To help answer the question, what is the hadal zone? let’s first looks to where its name comes from. In Greek mythology, the god Hades rules over the dark underworld, where the dead spend eternity. This world is hostile and remote, guarded by the Three-Headed-Hound of Hades, Cerberus. The river Styx surrounds Hades. Entering Hades is an irreversible move.

In the myth of Orpheus and Eurydice, the living Orpheus enters Hades in an attempt to save his lover, Eurydice. He makes it out with his life, thanks to his beautiful music, but is unable to save Eurydice. 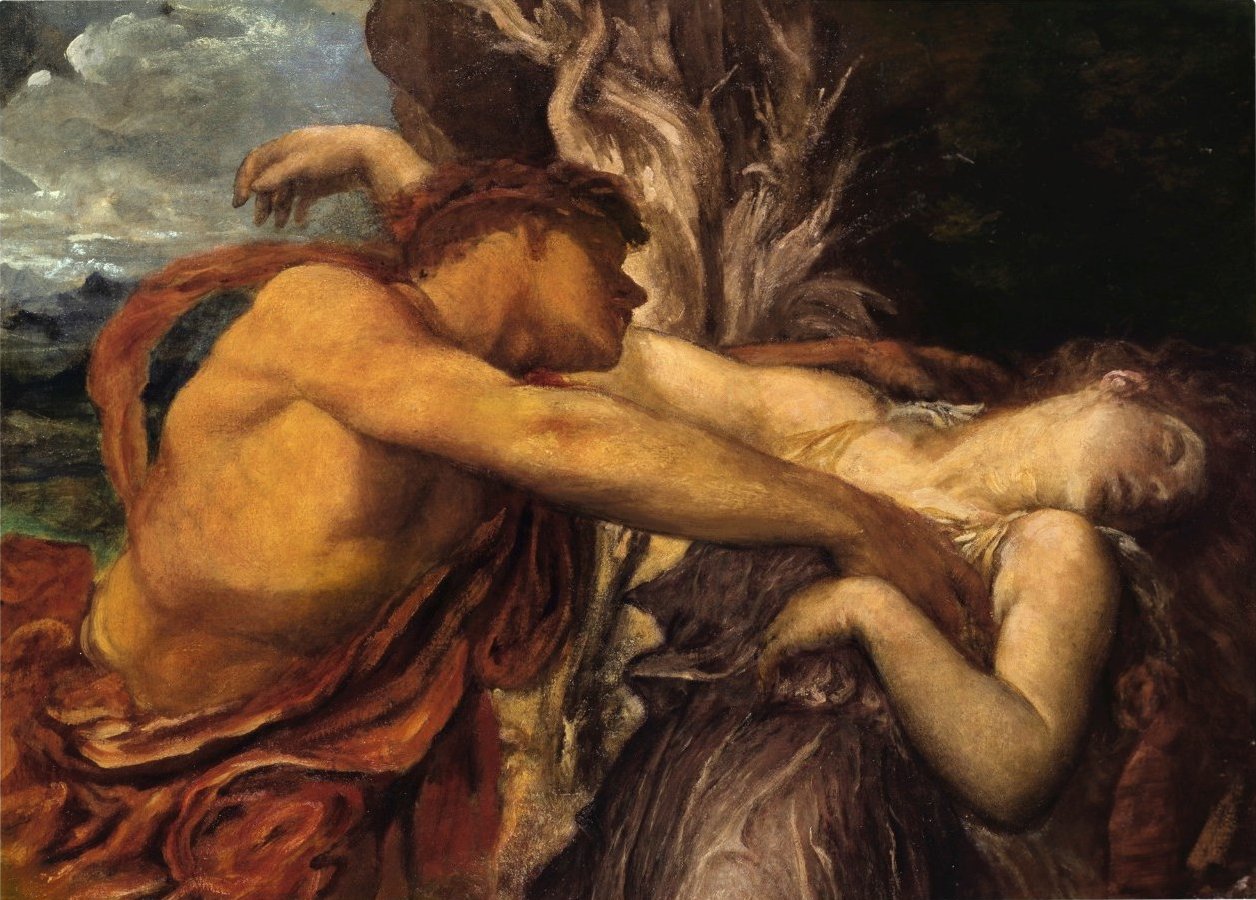 The myth of Hades has many parallels with the deepest reaches of our oceans. They are both extremely remote and dark. Only three people in history have seen them in person. Marine biologists hope to save these depths from destruction before it is too late. Much like Orpheus, they are seeking to save something precious that has been beyond the reach of humanity. Modern technology is just now beginning to enable us to truly understand and try to protect these rare Hadal habitats. With dedicated conservation, humanity may be able to prevent this story from ending like that of Orpheus and Eurydice.

The Hadal Zone Is the Deepest Reaches of the Ocean

This imagery of a remote dark world deep beneath the surface makes Hades a perfect analogy for the deepest reaches of the ocean. The open (pelagic) ocean is divided up into five zones, based upon depth. In each zone, less sunlight from the surface filters through. In the third zone, the bathyal zone, no light penetrates except for rare exceptions. It is also called the midnight zone, or the dark zone. This stretches from one to four kilometers (3,300-13,000 ft) below the surface of the ocean.

The hadal zone (separated from the bathyal by the even darker abyssal zone) starts at the ocean floor, around six kilometers below sea level. It consists only of trenches formed by the movements of the earth’s tectonic plates. At the deepest (in the Mariana trench) these stretch to 11km below sea level.

This final 5 km of the depths of the ocean represents 45% of the ocean’s depth. Though these areas small, isolated regions, the life in them is unique from the rest of the ocean. 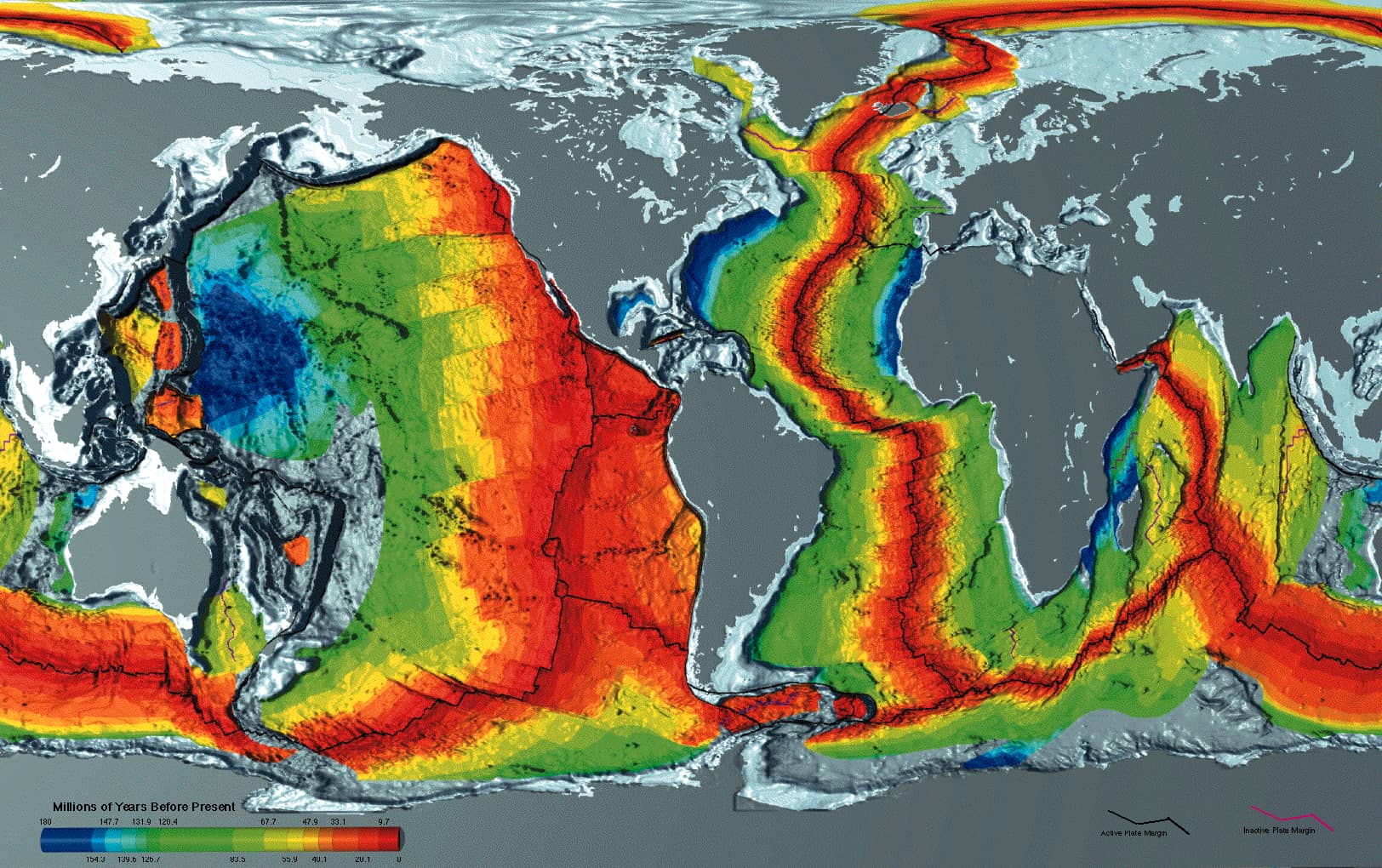 The age of the seafloor crust. Newer regions are red.

There are 46 trenches in the ocean that make up the entire hadal zone. 84% of these are found in the Pacific Ocean. The tectonic activity of the so-called “ring of fire” formed by the subduction zone of the Pacific and Eurasian continental plates allows for these deep cuts in the ocean to form.

Life in the Dark

Though it was once believed that life without light was impossible, it is now clear that even the hadal zone is full of life. Many unique and unusual creatures fill these extreme depths. Humans have never seen many of these species. They defy the odds by living in a hostile environment, under extreme pressure, near-freezing waters with few nutrients and absolute darkness.

Though much of the life in the deep sea remains unknown, our understanding of this unique biome is growing. Many unique groups of species have been identified at these depths. A few groups dominate life in these depths.

Amphipods are crustaceans similar to shrimp and lobsters. They feed on detritus, the material that slowly floats down from species dying in the water above. These species have been found as deep as 9.1 km (about 30,000 feet) below the surface. 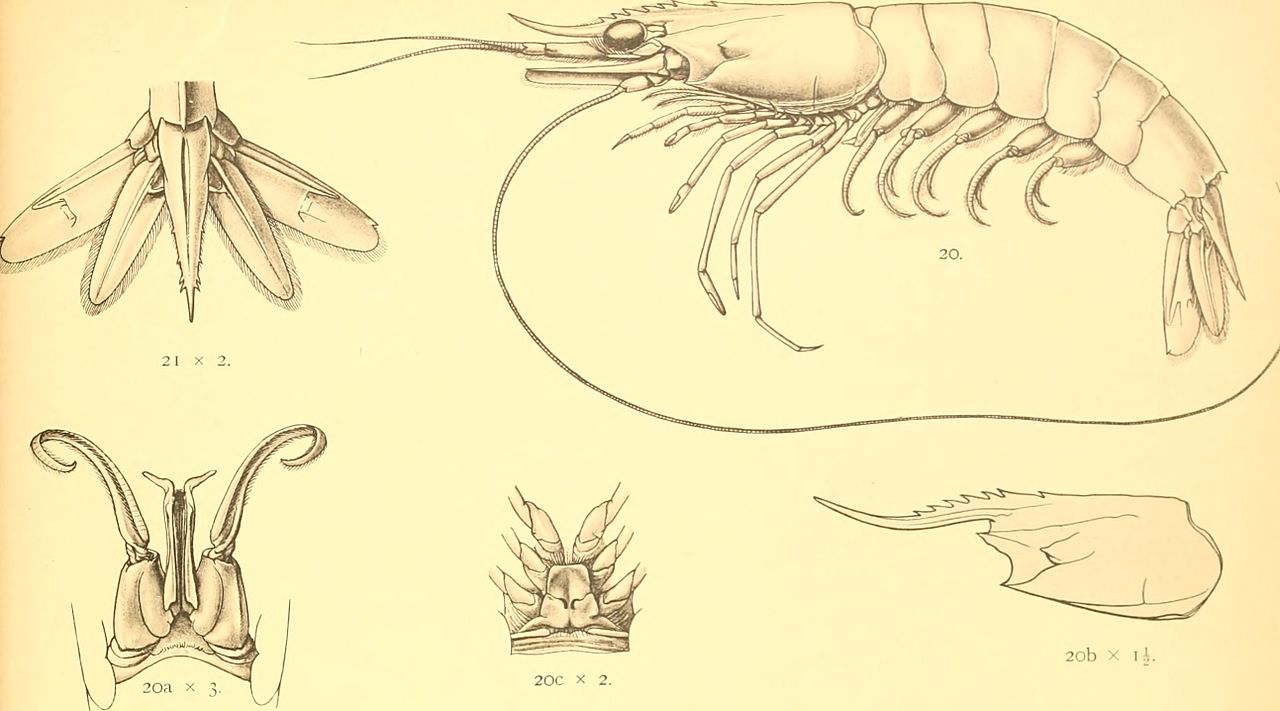 Predators also venture into the depths. Scientists have found Decapods, another group of crustaceans, as deep as 7 km (23,000 feet.) This group includes crayfish, shrimp and crabs. At these depths, a rare species, Benthescymus crenatus dominates these communities. They hunt the Amphipods that live here.

Even in these depths, there are select species of fish. Researchers have seen the hadal snailfish Pseudoliparis amblystomopsis as deep as 8 km (27,000 feet) below the surface. These observations were made in the Japan Trench by the Hakuho-Maru submersible. Below this, essential proteins for fish cannot function, so no fish can survive.

Our understanding of the ecology of the hadal zone is still in its infancy. Scientists have made very few observations, and it is likely that they will find new species.

Exploration of the Hadal Zone

The deepest points of the ocean are hostile not only to life, but also to technology. These extreme depths are extremely difficult to study. Fewer people have seen these depths than have been to the surface of the moon!

Humans have reached the deepest known point in the ocean, the Challenger Deep, only twice. In 1960 Jacques Piccard and Don Walsh made the first trip. Canadian director James Cameron completed the second trip in 2012.

Islands Below the Sea

The ecology of hadal trenches is unique for many reasons. It’s remoteness and extreme conditions are inhospitable to all but a few rare and specialized species, seen nowhere else on earth. The borders of these trenches create something like an island. Almost no species can move between these trenches.

We see this sort of isolation in other ecosystems. For example, islands and mountain tops are similarly isolated. Because of this, the species that inhabit them are unique. The Galapagos islands that Darwin studies are an example of the rapid evolution that this allows. The isolation of hadal trenches leads to the same type of reproductive isolation. This means that understanding the diversity and ecology of these ecosystems requires a more exhaustive search than the few isolated snapshots we have.

Human Impacts on the Hadal Zone 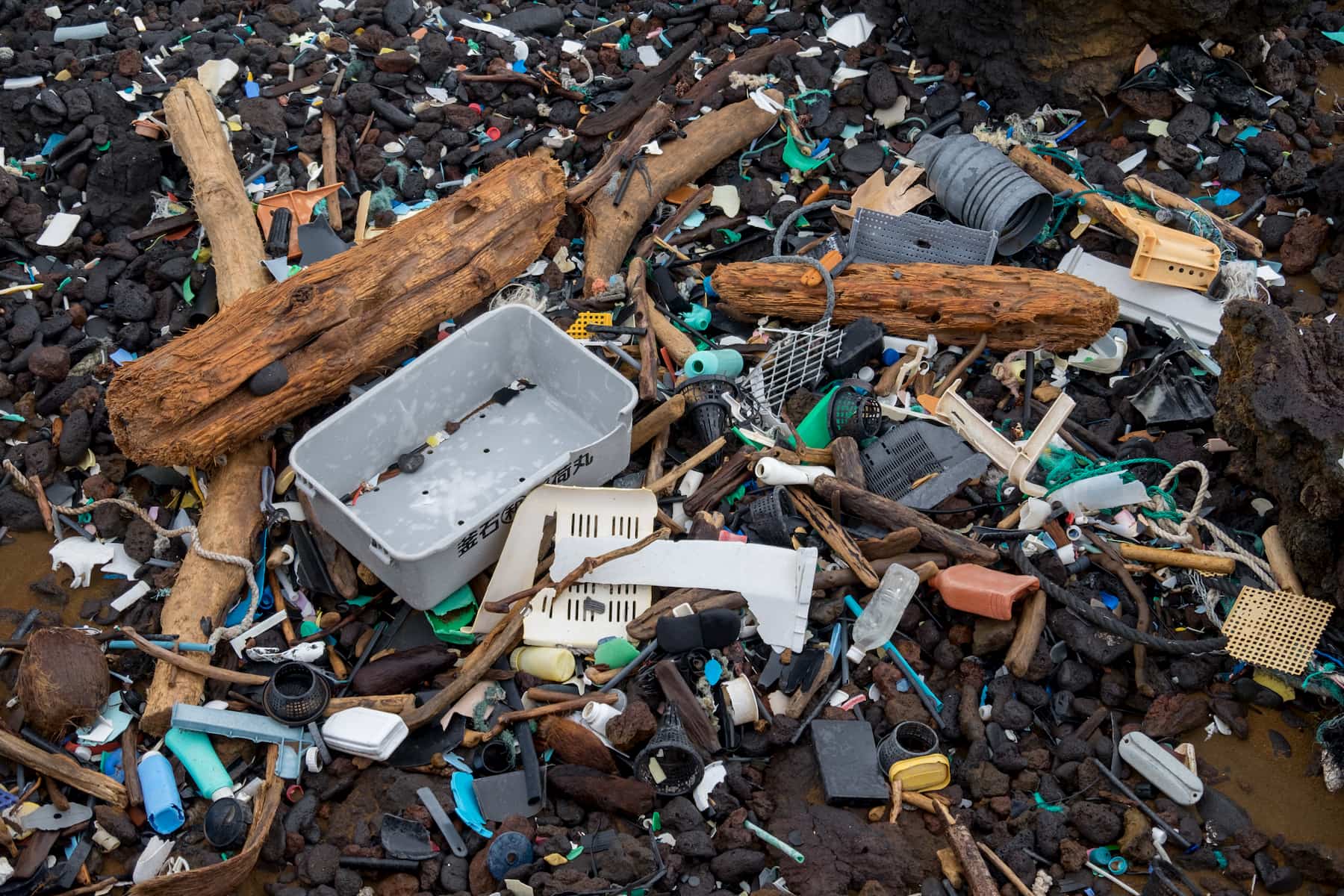 Despite its extreme remoteness, even these depths are not immune to human waste. Everything from beer cans and microplastics slowly settles from the islands of trash on the surface. The legacy of nuclear testing is apparent in the form of carbon-14 isotopes in deep-sea organisms. This reveals how quickly pollutants enter deep sea organisms through the food-web.

These ecosystems are delicate, unknown, and extremely unique. Protecting them from human activity is essential to ensuring that we can at the very least identify the species that live there before they go extinct. With more knowledge comes the power to protect these ecosystems. It may now be impossible to know what these environments would have looked like without human impacts. We can, however, slow this damage through a global commitment to minimizing the pollution of our oceans.