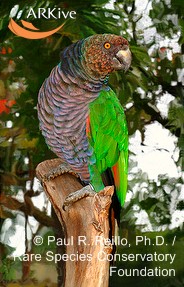 Amazona imperialis NatureServe Explorer Species Reports -- NatureServe Explorer is a source for authoritative conservation information on more than 50,000 plants, animals and ecological communtities of the U.S and Canada. NatureServe Explorer provides in-depth information on rare and endangered species, but includes common plants and animals too. NatureServe Explorer is a product of NatureServe in collaboration with the Natural Heritage Network. ITIS Reports -- ITIS (the Integrated Taxonomic Information System) is a source for authoritative taxonomic information on plants, animals, fungi, and microbes of North America and the world. FWS Digital Media Library -- The U.S. Fish and Wildlife Service's National Digital Library is a searchable collection of selected images, historical artifacts, audio clips, publications, and video.The imperial amazon (Amazona imperialis) or Dominican amazon, also known as the sisserou, is a parrot found only on the Caribbean island of Dominica. It has been designated as the national bird of Dominica. The species is critically endangered. In 2019, it was estimated there were only about 50 mature individuals left in the wild.The imperial amazon measures an average of 48 cm (19 in) in length. With males weighing an average of 900 g (32 oz) and females 650 g (23 oz), the species is large for its genus. Being of the family Psittacidae, the sisserou has zygodactyl feet and a thick, hooked bill with a muscular tongue. This bill is fashioned in such a way that using its hinged mandibles and tongue, the sisserou can easily move food around in its mouth. Males and females have identical plumage. Adult plumage is very colorful and mostly darkly

No recovery information is available for the Imperial parrot.
Back to full archive