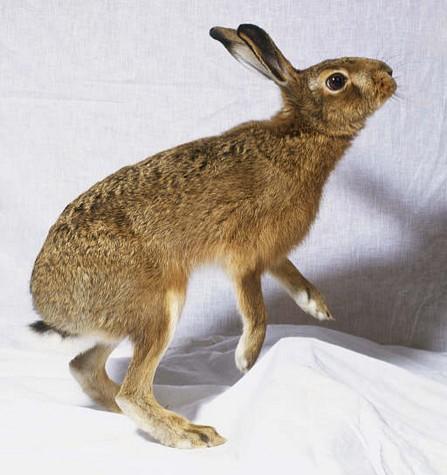 Caprolagus hispidus NatureServe Explorer Species Reports -- NatureServe Explorer is a source for authoritative conservation information on more than 50,000 plants, animals and ecological communtities of the U.S and Canada. NatureServe Explorer provides in-depth information on rare and endangered species, but includes common plants and animals too. NatureServe Explorer is a product of NatureServe in collaboration with the Natural Heritage Network. ITIS Reports -- Caprolagus hispidus ITIS (the Integrated Taxonomic Information System) is a source for authoritative taxonomic information on plants, animals, fungi, and microbes of North America and the world. FWS Digital Media Library -- The U.S. Fish and Wildlife Service's National Digital Library is a searchable collection of selected images, historical artifacts, audio clips, publications, and video. The hispid hare, also called Assam rabbit and bristly rabbit, is a leporid native to South Asia, whose historic range extended along the southern foothills of the Himalayas. Today, its habitat is highly fragmented with an area of occupancy estimated at less than 500 km² extending over an area of 5,000 to 20,000 km². Populations experienced a continuing decline in suitable habitat due to increasing agriculture, flood control, and human development. It is therefore listed as Endangered on the IUCN Red List since 1986.

No recovery information is available for the Hispid hare.
Back to full archive