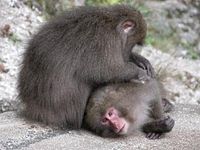 Macaca fuscata NatureServe Explorer Species Reports -- NatureServe Explorer is a source for authoritative conservation information on more than 50,000 plants, animals and ecological communtities of the U.S and Canada. NatureServe Explorer provides in-depth information on rare and endangered species, but includes common plants and animals too. NatureServe Explorer is a product of NatureServe in collaboration with the Natural Heritage Network. ITIS Reports -- Macaca fuscata ITIS (the Integrated Taxonomic Information System) is a source for authoritative taxonomic information on plants, animals, fungi, and microbes of North America and the world. FWS Digital Media Library -- The U.S. Fish and Wildlife Service's National Digital Library is a searchable collection of selected images, historical artifacts, audio clips, publications, and video. The Japanese macaque (Macaca fuscata), also known as the snow monkey, is a terrestrial Old World monkey species that is native to Japan. They get their name "snow monkey" because some live in areas where snow covers the ground for months each year – no other non-human primate is more northern-living, nor lives in a colder climate. Individuals have brownish grey fur, pinkish-red faces, and short tails. Two subspecies are known. In Japan, the species is known as Nihonzaru (ニホンザル, a combination of Nihon 日本 "Japan" + saru 猿 "monkey") to distinguish it from other primates, but the Japanese macaque is very familiar in Japan, so when Japanese people simply say saru, they usually have in mind the Japanese macaque.

No recovery information is available for the Japanese macaque.
Back to full archive