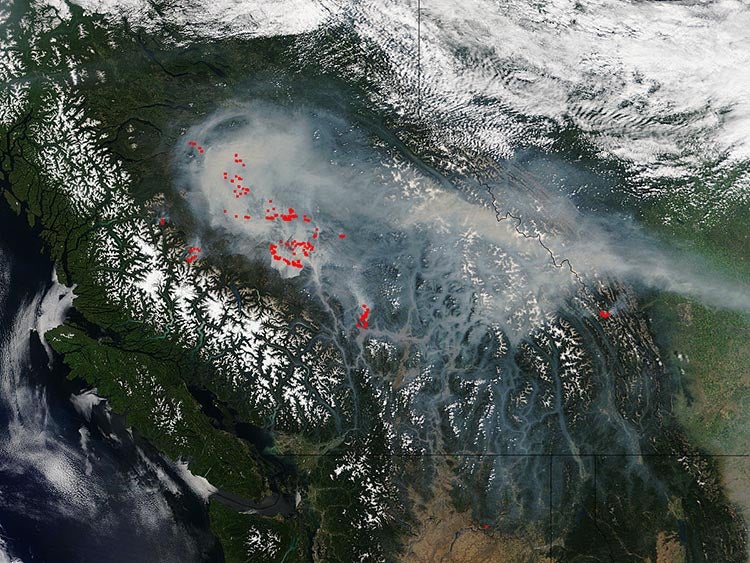 Despite a light dusting of snow, several fires, shown as red dots, still burn in the western mountains of British Columbia, Canada. Though the fires appear to be burning in the mountains, it is not clear what caused them. They could be agricultural fires, controlled burns, or wildfires. Bright and snow-capped, the Coast Mountains run along the Pacific coast. The small grey spot on the southern tip of Vancouver Island, left, is Victoria, the capital of BC. The cement colored area on the mainland northeast of Victoria is Vancouver. The Moderate Resolution Imaging Spectroradiometer (MODIS) on the Aqua satellite captured this true-color image on October 5, 2003.

The first British settlement in the area was Fort Victoria, established in 1843, which gave rise to the City of Victoria, at first the capital of the separate Colony of Vancouver Island. Subsequently, on the mainland, the Colony of British Columbia (1858–1866) was founded by Richard Clement Moody and the Royal Engineers, Columbia Detachment, in response to the Fraser Canyon Gold Rush. Moody was Chief Commissioner of Lands and Works for the Colony and the first Lieutenant Governor of British Columbia: he was hand-picked by the Colonial Office in London to transform British Columbia into the British Empire’s “bulwark in the farthest west”, and “to found a second England on the shores of the Pacific”. Moody selected the site for and founded the original capital of British Columbia, New Westminster, established the Cariboo Road and Stanley Park, and designed the first version of the Coat of arms of British Columbia. Port Moody is named after him