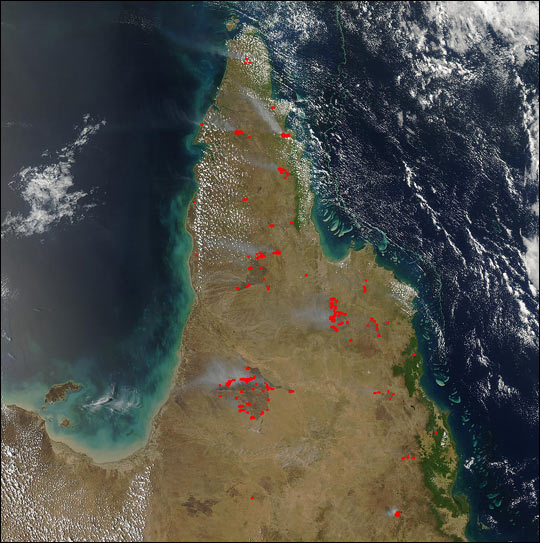 Fires on Cape York Peninsula Australia. Large fires continue to spread across Australia’s Cape York Peninsula in late October 2003. This image of numerous fires (marked in red) was captured by the Moderate Resolution Imaging Spectroradiometer (MODIS) on the Aqua satellite on October 31, 2003. Smoke hangs over the scene from fires burning both in the forests along the eastern coast and the interior savannas and grasslands.

Australia, officially the Commonwealth of Australia, is a sovereign country comprising the mainland of the Australian continent, the island of Tasmania, and numerous smaller islands. It is the largest country in Oceania and the world’s sixth-largest country by total area. The neighbouring countries are Papua New Guinea, Indonesia, and East Timor to the north; the Solomon Islands and Vanuatu to the north-east; and New Zealand to the south-east. The population of 26 million is highly urbanised and heavily concentrated on the eastern seaboard. Australia’s capital is Canberra, and its largest city is Sydney. The country’s other major metropolitan areas are Melbourne, Brisbane, Perth, and Adelaide. Therefore the image is taken by satellite.