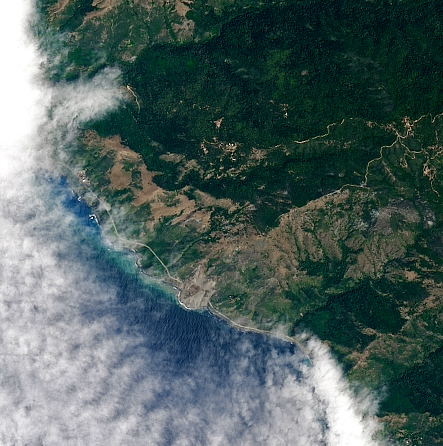 Today’s Image of the Day comes thanks to the NASA Earth Observatory and features a look at a landslide that has buried a famous California highway.

According to the California Department of Transportation, a massive landslide brought over a million tons of rocks and dirt down on California’s scenic Highway 1.

The image was captured by the Operational Land Imager on board the Landsat 8 satellite.

“This is a large slide preceded by smaller slides, which is not uncommon,” said Thomas Stanley, NASA geologist and researcher. “Much of the California coastline is prone to collapse, so it’s fortunate that this landslide happened in an unpopulated location.” California landslide buries famous highway shown in image above all of the fog and surrounding water.

California is a state in the Pacific Region of the United States. With 39.5 million residents across a total area of about 163,696 square miles (423,970 km2), California is the most populous U.S. state and the third-largest by area. The state capital is Sacramento. The Greater Los Angeles Area and the San Francisco Bay Area are the nation’s second- and fifth-most populous urban regions, with 18.7 million and 9.7 million residents respectively.[13] Los Angeles is California’s most populous city, and the country’s second-most populous, after New York City. California also has the nation’s most populous county, Los Angeles County, and its largest county by area, San Bernardino County. The City and County of San Francisco is both the country’s second most densely populated major city after New York City and the fifth most densely populated county, behind only four of the five New York City boroughs.