The Cape Cod National Seashore (CCNS) was created on August 7, 1961 by President John F. Kennedy. It encompasses 43,607 acres on Cape Cod, in Massachusetts.

It was a sense of both looking forward and backward that led Kennedy and the United States government to establish Cape Cod National Seashore. The land would be set aside for all Americans for the sake of recreation, for natural beauty, and for history. But the creation of the park would also set a new precedent.

Unlike most previous national parklands, which were usually carved out of rural public lands in the South and West, the Cape Cod park would be smack in the middle of established East Coast development. It would be the first time the U.S. government created a park out of land that was primarily in private hands. Commercial and residential properties were donated or bought from private owners (sometimes by eminent domain) and from the towns of Provincetown, Truro, Wellfleet, Eastham, Orleans, Chatham until the park spanned 43,607 acres (68.1 square miles or 176.5 square kilometers). Today, Cape Cod National Seashore spans 40 miles of seashore, including six major public beaches, 12 hiking and biking trails, and vast stretches of protected ponds, dune fields, and coastal pine barrens; the local towns also manage many adjacent beaches and green spaces. 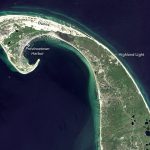 Upon signing the bill to create the Seashore in 1961, Kennedy expanded the vision beyond his beloved summer home: “I think we are going to need a good deal more effort like this, particularly in the more highly developed urban areas where so many millions of people now live, and work out a means of securing the advantages of recreation and leisure which these areas can bring.”

The Operational Land Imager (OLI) on Landsat 8 captured these natural-color images of Cape Cod on August 23, 2016. Yellow lines denote the borders of the park, which blend with and run around six towns.

A sizable portion of the early American story began on this outer edge of Massachusetts. In November 1620, the first piece of North America spotted by the passengers and crew of the Mayflower was the spit of glacial sand and rock known as Cape Cod. The Pilgrims had intended to sail farther south, to the Virginia colony, but rough, shallow waters heaved their boat and scared them back to the safety of Provincetown Harbor. There on November 11, 1620, they signed the first self-governing document in American history, the Mayflower Compact.

Over the coming weeks, they made their first contact with Native American people, likely the Nauset tribe. First Encounter Beach in Eastham (image below) marks the reported location of a skirmish between the colonists and the tribe. The Pilgrims eventually sailed across Cape Cod Bay and settled in Plymouth.

The entirety of Cape Cod is a piece of geologic history, a reminder of the last Ice Age. Retreating ice sheets dumped rock and sand on the landscape, and rising seas shaped and sculpted the massive sandbar that some scientists believe to be the largest glacial peninsula on Earth. Mixed in with those sands are thousands of years of Native American history from the “people of the first light” (the Wampanoag). You can learn more about the geology of the Cape in our feature: World of Change: Coastline Change. 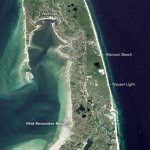 Also preserved within the national seashore are several forms of historic architecture. Of course there are many lighthouses, including Highland Light, which was commissioned by George Washington. But there are also more than 50 houses and structures built in the “Modernist” style, which merges minimal, unadorned design with the contours and colors of the landscape. Truro and Provincetown are also home to dozens of spartan dune shacks that became quite popular with 20th century artists and writers such as Eugene O’Neill, Jack Kerouac, e. e. cummings, Norman Mailer, and Jackson Pollock.

At the end of his 1865 book Cape Cod, Henry David Thoreau wrote: “A man may stand there and put all America behind him.” In this year when the National Park Service celebrates its 100th anniversary, we proudly put all America in front of you in our gallery of U.S. parks and protected lands.