Churning waters in the English Channel 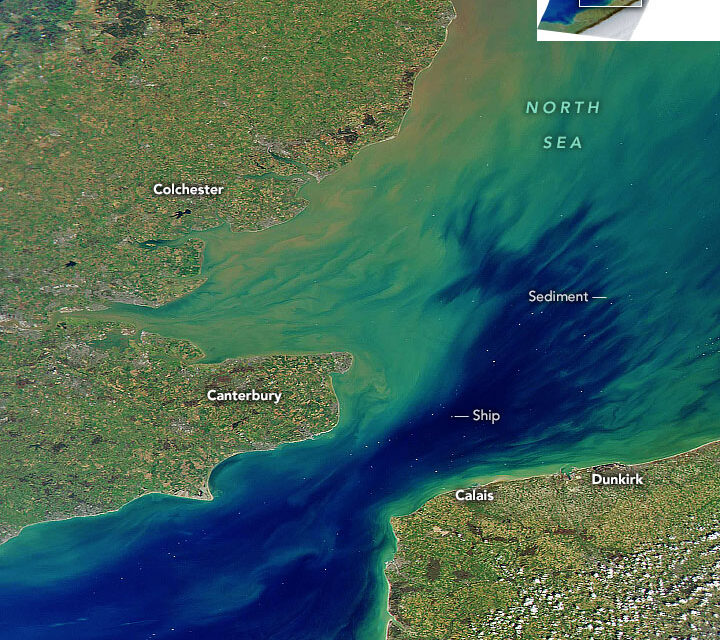 Today’s Image of the Day from NASA Earth Observatory features the eastern end of the English Channel (La Manche) in mid-March 2022. The skies are clear, but the waters are dark from sediments that are stirred up from the seafloor.

According to NASA, springtime in these northern seas is also accompanied by the outflow of sediments from rivers, and the blooming of phytoplankton. These floating organisms thrive in the nutrient-rich water.

“The optical complexity of the waters in the eastern English Channel and southern North Sea is a real witches brew of suspended sediments issuing from the Thames Estuary and the soft substrates of the French and Belgian coastlines,” said Tim Smyth, science lead for marine biogeochemistry and observations at Plymouth Marine Laboratory (UK). The sediments are kicked up by waves and strong currents moving back and forth through the Channel.

“The complexity of the currents and the ever-shifting seafloor bathymetry shapes the beautiful filamentous patterns in this region,” said Smyth. “The optical complexity of the meeting of the English Channel and North Sea makes it difficult to separate sediment from the chlorophyll signal there.”

The natural-color image was captured on March 17, 2022 by the multispectral HawkEye sensor aboard the SeaHawk CubeSat.

“It is extremely rare to actually have a cloud-free day across this region,” said Alan Holmes, the Cloudland Instruments engineer who built HawkEye. “This does not happen often across wide fields of view.”