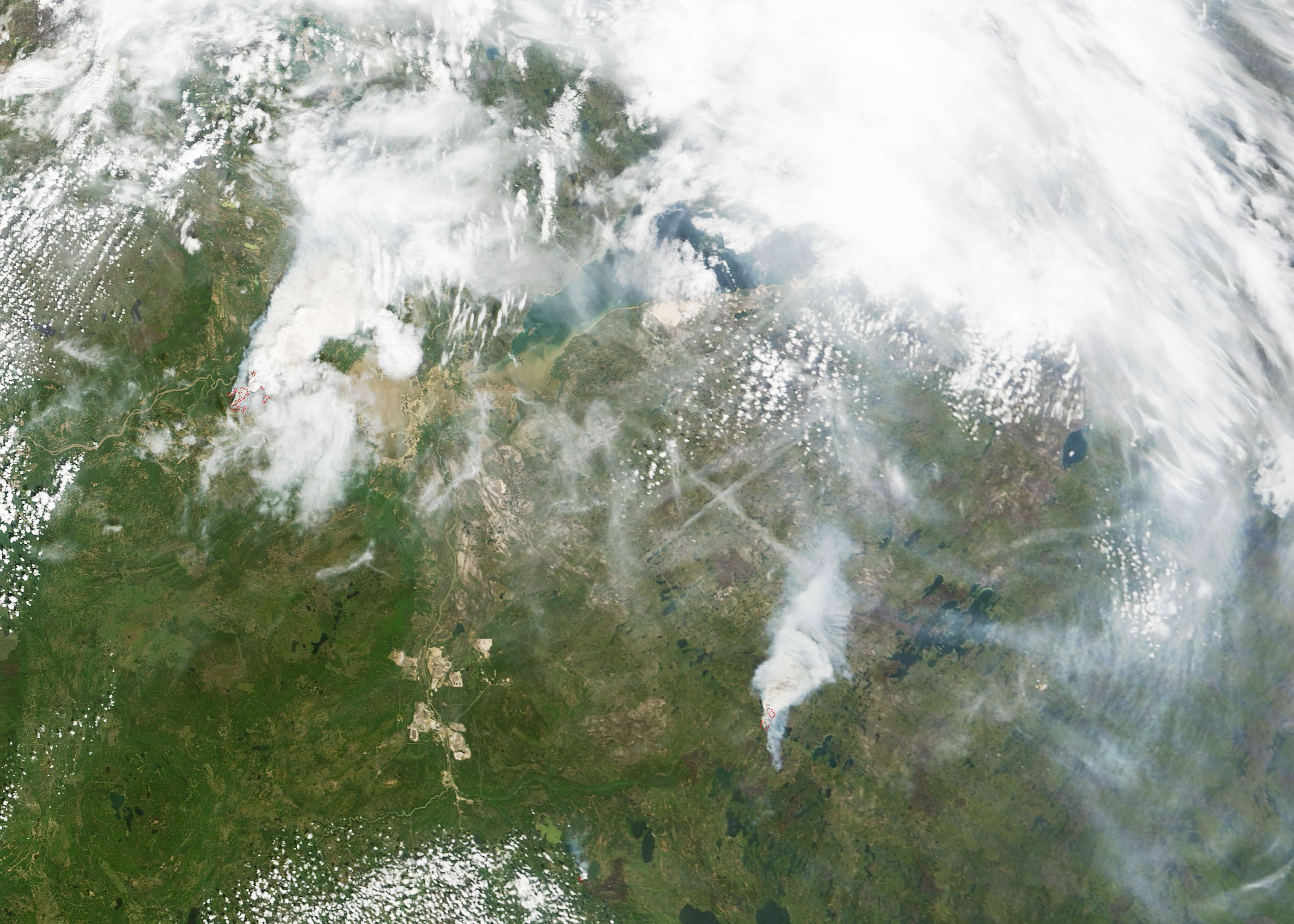 There are identical Moderate Resolution Imaging Spectroradiometer (MODIS) sensors on two separate NASA satellites. Terra, which was launched in 1999, carries one of them. Launched a few years later,Aqua carries the other one. On June 4, 2015, both MODIS sensors acquired images of the same wildfire and smoke plume in Saskatchewan, Canada, just 15 minutes apart. Comparing Smoke Seen by Aqua and Terra in this image.

The bottom image was acquired at 1:40 p.m. (1940 Universal Time) by the MODIS on Aqua. Note how much more faint smoke is visible in the Terra image. The images were taken just 15 minutes apart, so it is unlikely the amount of smoke changed significantly. Instead, more smoke is probably visible in the Terra image because of differences in the orbital geometry of the two satellites.

MODIS acquires data in broad swaths that are 2,330 kilometers (1,450 miles) wide with a continuously moving double-sided scan mirror that sweeps back and forth. When the scan mirror is pointing straight down, the sensor collects imagery at nadir, meaning it is at the center of a swath. When the scan mirror is pointing off to one side or the other, it is said to be off-nadir and the imagery collected is closer to the edge of a swath. (Watch this animation to see how MODIS collects data. To see the boundary between swaths in this specific case, look at Terra’s view and Aqua’s view of the smoke plume using the Worldview browser.)

The smoke plume was much closer to the center of the swath for Aqua than Terra. It was only 73 kilometers (45 miles) from the center of the swath as seen by Aqua, while it was 635 kilometers (394 miles) away for Terra. Because the mirror was pointed out (at a much larger angle) for Terra, the sensor had to “look through” more of the atmosphere, and thus observed more smoke. In addition, differences in the position of the two spacecrafts relative to the Sun may have also played a role, explained Ralph Kahn an atmospheric scientist at Goddard Space Flight Center.