Conditions in the Amazon basis are driest since 2002 • Earth.com

Conditions in the Amazon basis are driest since 2002 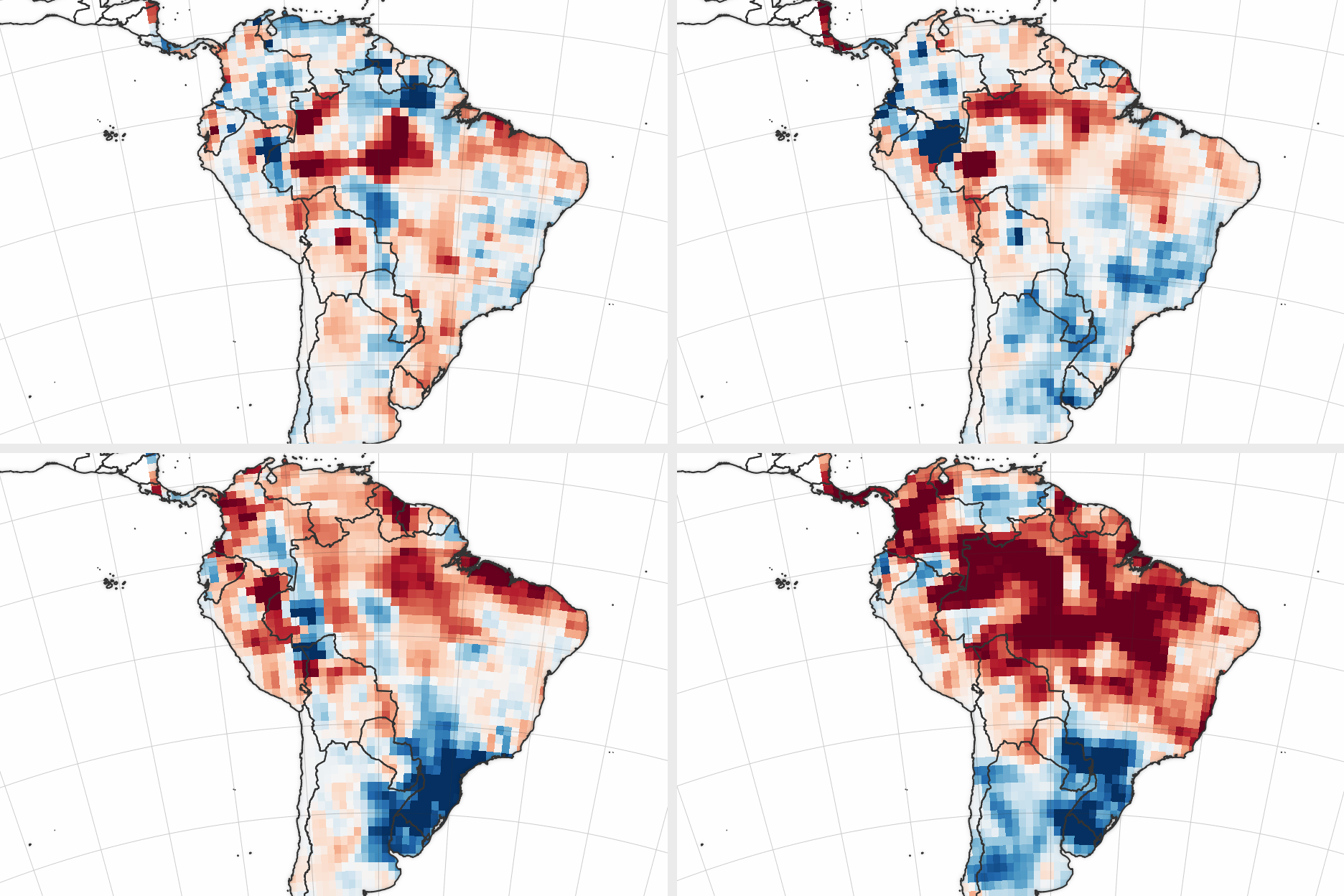 “Severe drought conditions at the start of the dry season have set the stage for extreme fire risk in 2016 across the southern Amazon,” said Doug Morton, an Earth scientist at NASA’s Goddard Space Flight Center and a co-creator of the fire forecast. The wildfire risk for July to October now exceeds the fire risk in 2005 and 2010—drought years when wildfires burned large swaths of the rainforest.

The Amazon fire forecast analyzes the relationship between certain climate observations and active fire detections from NASA satellites to predict fire season severity. Developed in 2011 by scientists at the University of California, Irvine (UC Irvine) and NASA, the forecast model is focused particularly on the link between sea surface temperatures and fire activity. Warmer sea surface temperatures in the tropical Pacific (as observed during an El Niño) and Atlantic oceans shift rainfall away from the Amazon region, increasing the risk of fire during dry months. Conditions in the Amazon basis are driest since 2002.

The forecast team also tracks changes in water storage during the dry season, as observed by the Gravity Recovery and Climate Experiment (GRACE) mission. GRACE measurements serve as a proxy for the dryness of soils and forests. The maps above show the accumulated deficit in surface and underground water storage in 2016 and in other recent drought years, as detected by GRACE. Shades of red depict areas where rainfall has been below normal, while blues were above normal. (Click here to learn more about how GRACE studies water supplies.)

For 2016, El Niño-driven conditions are far drier than in 2005 and 2010—the last years when the region experienced drought. The prediction team has developed a web tool to track the evolution of the fire season in near-real time by Amazon region. Estimated fire emissions from each region are updated daily based on active fire detections—made by the Moderate Resolution Imaging Spectroradiometer (MODIS) instrument on NASA’s Terra satellite—and data from previous years in the Global Fire Emissions Database. So far, the region has seen more fires through June 2016 than in previous years, another indicator of a potentially tough season.

“When trees have less moisture to draw upon at the beginning of the dry season, they become more vulnerable to fire and evaporate less water into the atmosphere,” said UC-Irvine scientist Jim Randerson, who collaborated with UC-Irvine scientist Yang Chen on building the forecast model. “This puts millions of trees under stress and lowers humidity across the region, allowing fires to grow bigger than they normally would.”

NASA and UC-Irvine scientists have worked in recent years with South American officials and scientists to make them aware of the forecast. Liana Anderson, a from Brazil’s National Center for Monitoring and Early Warning of Natural Disasters, said “fire forecasts three to six months before peak fire activity are important to identify areas with higher fire probability for integrated planning.”

The fire forecast team is also working to improve wildfire forecasts in other regions of the world. The scientists recently identified nine regions outside the Amazon where fire season risk could be forecast three- to six months ahead of peak fire activity. Randerson said it may be possible to build seasonal fire forecasts for much of Central America and for many countries in Southeast Asia.