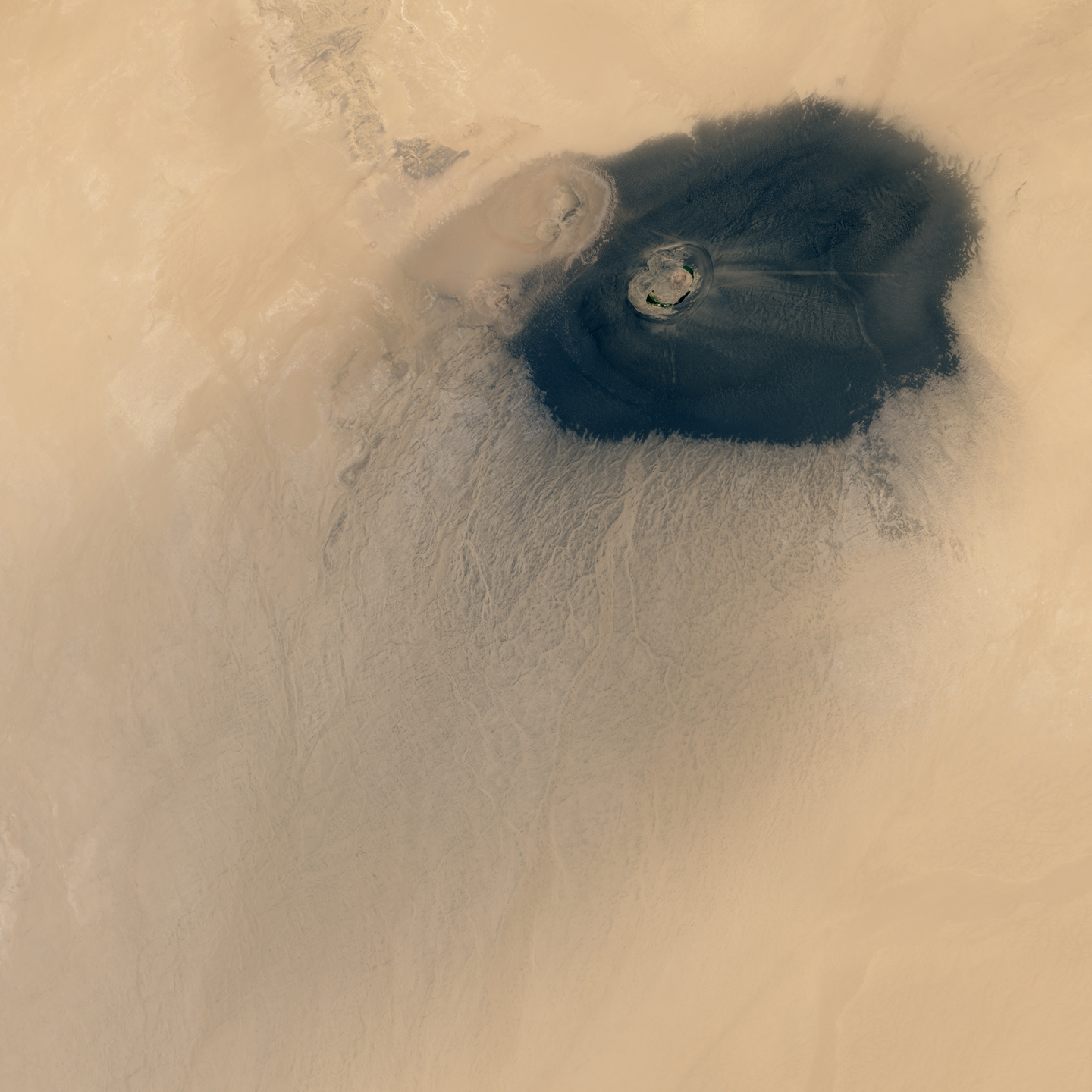 Desert Contrast. Seen from space, few other dormant volcanoes look as exotic and spectacular as Waw an Namus. The volcano, located deep in the Sahara Desert in the Fezzan region of southwestern Libya, appears as a smear of dark basaltic ash and tephra that contrasts sharply with the light-colored sand of the Sahara Desert.

The Operational Land Imager (OLI) on Landsat 8 captured this view of the feature on May 29, 2015. While the precise date of the most recent eruption is not known, the lack of erosion and weathering implies that it probably occurred in the last few thousand years. South of the ash field, mud streams have begun the slow process of eroding the tephra and ash away. The ash field extends around a much smaller caldera that is about 4 kilometers (2 miles) wide. Calderas are hollowed-out circular depressions that form at the summit of volcanoes when magma is withdrawn or erupted from a shallow underground magma reservoir.

The lower image shows a closer view of the caldera. Within it, three small salty lakes ringed with vegetation are visible. The volcano gets its name from the lakes, which are reportedly home to thriving communities of mosquitos. (In Arabic, Waw an Namus means “crater of mosquitos.”) The edge of a cinder cone is also visible near the center of the caldera. Cinder cones are steep, conical hills that accumulate around volcanic vents. They are made from small glassy rock fragments that pile up around vents as ash and congealed lava erupts.

The beauty and unique appearance of Waw an Namus has long fascinated travelers. In 1969, anthropologist Froelich Rainey described the feature this way: “The whole effect of Waw an Namus is weird. Quite suddenly we seemed to be in the shadow of a cloud, but the sky was clear and looking closely at the desert sand I noticed that it had changed from yellow to black with a thin surface layer of what looked like coal cinders. Then, after crossing about ten kilometers of this black desert, and without warning, we were abruptly halted by a huge crater perhaps three kilometers in diameter. In the center rose a brown volcanic cone surrounded by a series of narrow crescent-shaped blue lakes. There were occasional date palms and bamboo growing about the lakes and one small hut. The dark sand, the isolation, and the obvious record of what had happened there all contributed to the awesome spectacle before us.”