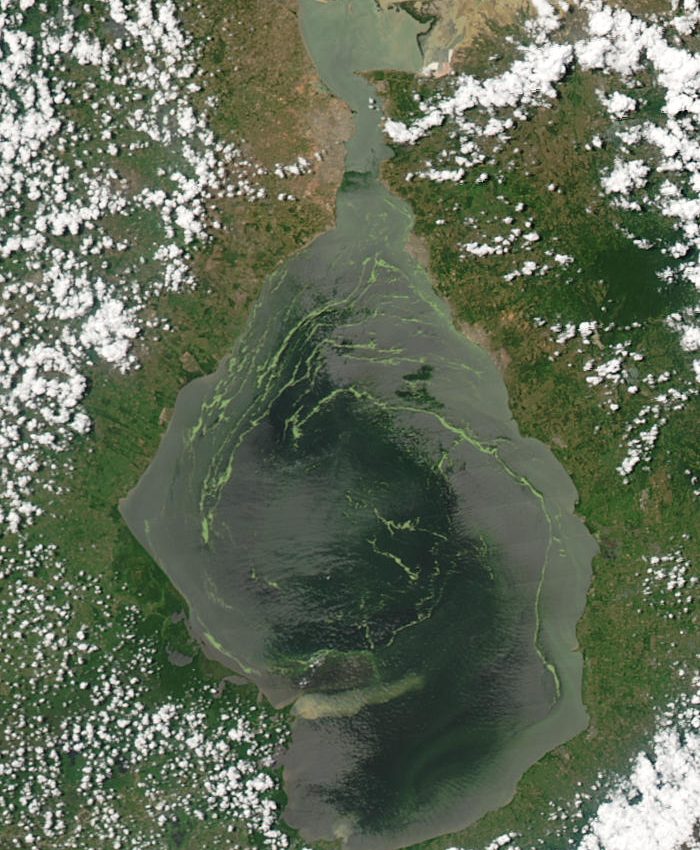 Green swirls of duckweed dominate the center of Venezuela’s Lake Maracaibo in this Moderate Resolution Imaging Spectroradiometer (MODIS) image acquired by NASA’s Aqua satellite on June 26, 2004. The Venezuelan government declared a state of emergency in mid-June to remove the fast-growing weed, spending about $2 million per month on clean-up efforts. Duckweed, more formally known as Lemna obscura, has never dominated Maracaibo so completely, so is the first time that officials have had to deal with the plant.
There is some mystery as to how the plant came to reside in the waters of Lake Maracaibo—South America’s largest lake. According to scientists from the Institute for the Conservation of Lake Maracaibo (ICLAM), one of the government organizations charged with the care of Lake Maracaibo, the weed is probably native to the lake, but few studies have been conducted in the past to confirm that suspicion. Other scientists disagree. “This type of Lemna is from Florida and Texas. We believed that it was transported by a ship,” says Dr. Nola Fernandez Acosta, a researcher from the Department of Environmental Engineering at the University of Zulia in Maracaibo, Venezuela.
Regardless of how the plant arrived, it is thriving on the lake. In the above image, duckweed covers 18 percent of the 13,280-square-kilometer lake, according to Acosta’s analysis. In the best (or worst) of conditions, duckweed can double in size in two days. The only way to remove the weed is to pull it out of the lake physically, says Acosta. No chemical or biological method has been found to treat the weed. The removal process has proven to be particularly difficult in the center of the lake where a specially equipped ship may be needed to pull the weed off the lake. More likely, however, the weed will simply run out of nutrients and the outbreak will die down on its own.
Another point of uncertainty is why the outbreak developed on such a large scale this year. Maracaibo is fed by both salt water from the Caribbean and fresh water from numerous rivers. The lighter fresh water floats on top of the heavier salt water, which forms a dense layer on the bottom. This set-up traps nutrients that have settled on the floor of the lake. This spring, heavy rains disrupted the usual pattern. The sudden influx of fresh water stirred the layers, allowing nutrients to float to the top where duckweed and other plants reside. This may have given the duckweed the boost it needed to expand rapidly. Additional potential sources of nutrients include sewage discharge and fertilizers and other agricultural run-off flowing into the lake through rivers. Acosta believes that chemicals used to clean up oil spills may have contributed to the duckweed problem. The lake basin hosts Venezuela’s largest oil fields, and Acosta reports finding high concentrations of biodegradable dispersants that contain phosphorous and poliaspartic acid—a chemical used to increase nutrient uptake in crops—a veritable feast for the plants. Scientists at ICLAM disagree, saying that dispersants have been banned from the lake for years and, even if they were present, could not contain enough nutrients to support the current duckweed population.
Duckweed probably began growing on Lake Maracaibo in early February 2004, and ICLAM has been carefully monitoring its growth using MODIS imagery. Duckweed is not toxic to fish, but some scientists are concerned that it could suck oxygen out of the lake as it decays, asphyxiating large numbers of fish. Though officials say the weed hasn’t harmed fish yet, it is putting a dent in the local fishing industry. The pesky plant clogs the motors of small boats, making it impossible for fishers to launch their vessels. Duckweed further threatens the local ecosystem by choking out other plants as it shades large portions of the lake. In certain conditions, the weed may concentrate heavy metals and bacteria such as salmonella and Vibrio cholerae, the bacterium that causes cholera. Despite these problems, the weed may yet have some positive use; Acosta says duckweed can be treated to be fed to poultry or to make paper.
The above image shows Lake Maracaibo at 250 meters per pixel, MODIS’ maximum spatial resolution. The image is available in additional resolutions. On December 17, 2003, before the duckweed invasion, MODIS onboard the Aqua satellite captured another image of Lake Maracaibo in which the green swirls that are so notable in the above image are missing.