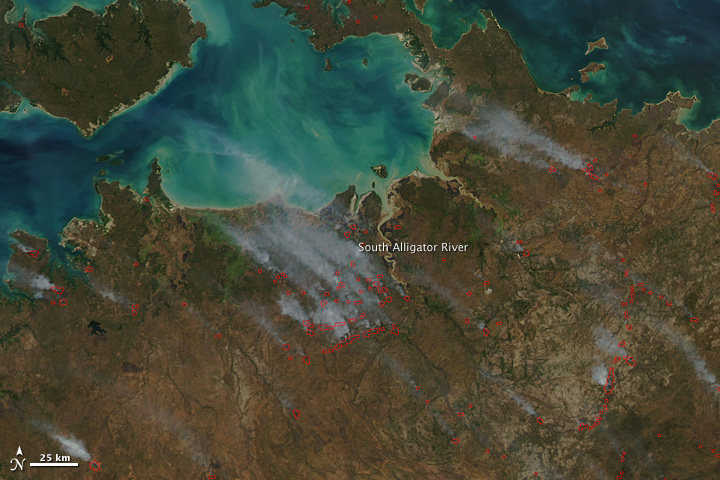 Fires in Australia’s Kakadu National Park. Numerous fires were burning in Kakadu National Park on June 10, 2009, when the Moderate Resolution Imaging Spectroradiometer (MODIS) on NASA’s Aqua satellite captured this image of Northern Territory, Australia. Smoke spreads to the northwest. Although they are numerous, these fires are not necessarily hazardous.

Northern Australia experiences a monsoon climate, with alternating rainy and dry seasons. Monsoon rains fuel rapid growth of grasses and other plants, which then become dormant in the dry season. To prevent devastating bushfires late in the dry season (which ends around September), Aboriginal landowners and the Australia Department of Environment conduct controlled burning throughout Kakadu National Park in the early and middle parts of the dry season. These fires carefully reduce the amount of fuel, especially around important historic and cultural sites and habitats, such as tidal mangrove forests, that are not well adapted to fire.

The large image provided above is at MODIS’ maximum spatial resolution (level of detail). Twice-daily images of Arnhem Land are available from the MODIS Rapid Response Team in additional resolutions and formats, including a false-color version that highlights the location of burn scars.