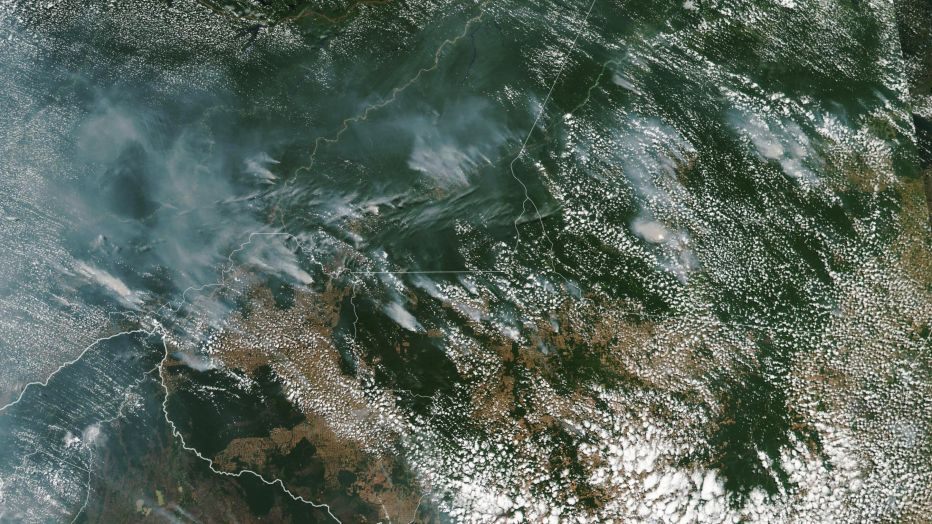 Fires in Brazillian Highlands. Hundreds of fires were burning across the Brazilian Highlands in southeastern Brazil on September 24, 2003. The Moderate Resolution Imaging Spectroradiometer (MODIS) on the Aqua satellite captured this image of the fires, which are marked with red dots. A cement-colored patch along the coastline at bottom center of the image is the city of Rio de Janeiro. Remnants of original forest make dark green splashes against the paler terrain, which is primarily used for agriculture.

Bounded by the Atlantic Ocean on the east, Brazil has a coastline of 7,491 kilometers (4,655 mi). It borders all other countries in South America except Ecuador and Chile and covers 47.3% of the continent’s land area. Its Amazon River basin includes a vast tropical forest, home to diverse wildlife, a variety of ecological systems, and extensive natural resources spanning numerous protected habitats. This unique environmental heritage makes Brazil one of 17 megadiverse countries, and is the subject of significant global interest and debate regarding deforestation and environmental protection.