Fires in Florida and Cuba 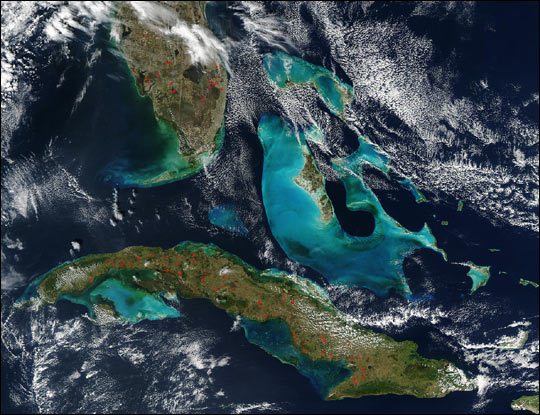 The Moderate Resolution Imaging Spectroradiometer (MODIS) on the Aqua satellite detected numerous fires (red dots) across the southern tip of Florida (top) and across Cuba (bottom).

The high-resolution image provided above is 500 meters per pixel. The MODIS Rapid Response System provides this image at MODIS’ maximum spatial resolution of 250 meters Also the fires in Florida and Cuba have made a huge impact on the area.

Florida is the southernmost contiguous state in the United States. The state is bordered to the west by the Gulf of Mexico, to the northwest by Alabama, to the north by Georgia. Also to the east by the Atlantic Ocean, and to the south by the Straits of Florida.  Cuba is officially the Republic of Cuba (Spanish: República de Cuba (help·info)), is a country comprising the island of Cuba as well as Isla de la Juventud and several minor archipelagos. Cuba is located in the northern Caribbean where the Caribbean Sea, Gulf of Mexico and Atlantic Ocean meet. It is east of the Yucatán Peninsula (Mexico), south of both the U.S. state of Florida and the Bahamas, west of Haiti and north of both Jamaica and the Cayman Islands.