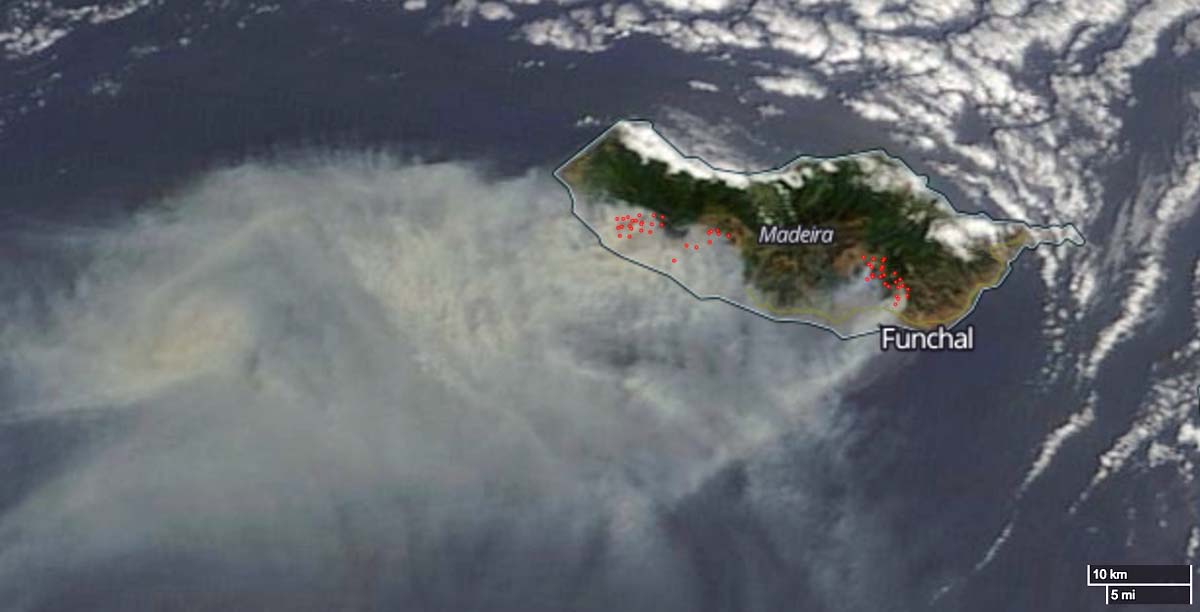 Thick smoke pours from fires burning on the Portuguese island of Madeira in this photo-like image collected by the Moderate Resolution Imaging Spectroradiometer (MODIS) on NASA’s Aqua satellite on August 13, 2010. The fires are outlined in red. According to news reports, the largest of the fires burned through 95 percent of the Funchal Ecological Park, a 1,000-hectare preserve set aside to restore native vegetation to the island. The park’s mountainous terrain extends from 520 meters to 1,818 meters in elevation in a short distance, potentially posing a challenge to fire fighters. Some of the smoke was either coming from a high elevation, or it was pushed high into the atmosphere by intense fires. The high plume casts a dark shadow on the ocean beneath it. Smaller fires burn both east and west of the primary blaze.

The smoke blows south over the Atlantic Ocean into the cloud-free wake created by the island. The top of a massive, six-kilometer tall shield volcano, Madeira rises 1,862 meters (6,109 feet) above the ocean’s surface. The imposing island leaves a visible wake in both the water and the atmosphere. Clouds pile up along the northern slopes of the island as the wind blows south, southwest. Air moves around the island, leaving a calm wake on the south side of the island.

The calm wake extends to the ocean as well. A swath of calm water stretches southwest from the island. Since there are fewer waves in this region, the ocean is reflecting more light directly back to the satellite sensor. The reflected light, or sun glint, gives the ocean a mirror-like appearance. The diagonal lines within the sun glint region are artifacts from the way the sensor records visible light as it scans from east to west.