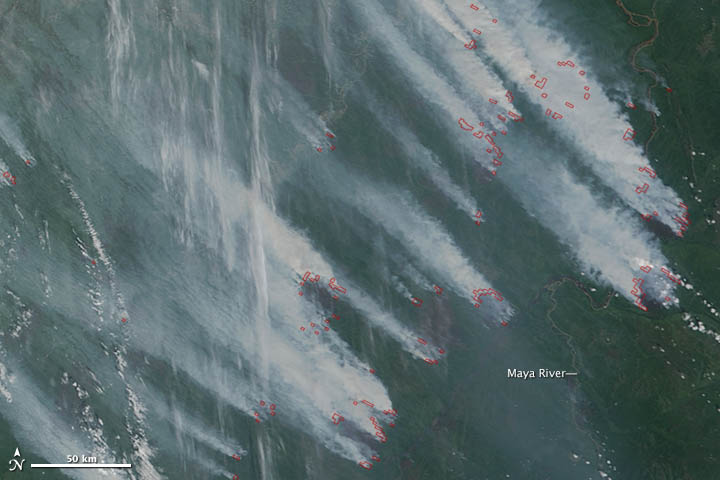 Snow was retreating northward, ice was breaking up in Volga River (left), and springtime agricultural fires (yellow) were burning in western Russia on April 24, 2004, when this image from the Moderate Resolution Imaging Spectroradiometer (MODIS) on the Aqua satellite was captured. Fires have been marked in yellow, and they stretch from Russia (top) across the border into northern Kazakhstan.

The widespread nature of the fires and the time of year suggests that these fires are being set intentionally for agricultural purposes. Though not necessarily immediately hazardous, such large-scale burning can have a strong impact on weather, climate, human health, and natural resources.

The high-resolution image provided above is 500 meters per pixel. The MODIS Rapid Response System provides this image at additional resolutions. The eastern boundary of Europe is generally considered, by convention, to run along the Ural Mountains, the Ural River, the Caucasus Mountains, and the Turkish Straits. The southern part of Russia has some small areas that lie geographically south of the Caucasus Mountain range, and therefore are geographically in Asia.

The other, eastern, part of the Russian Federation forms part of northern Asia, and is known as North Asia, also called Asian Russia or Siberia. Europe also forms a subcontinent within Eurasia, making all of Russia a part of the Eurasian continent.