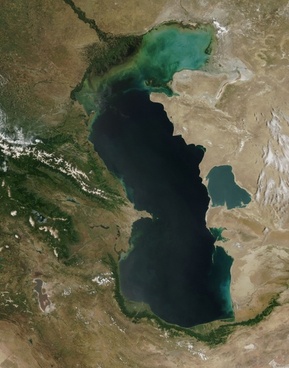 The Caspian Sea is awash in color in this Moderate Resolution Imaging Spectroradiometer (MODIS) image taken on April 9, 2004, by the Aqua satellite. The bright colors are probably caused by sediment and algae. The tan and green swirls hug the coast where agricultural run-off is carried on rivers into the Sea. The fertilizers in the water stimulate algae growth. As the algae die and decay, they rob the water of oxygen, creating dead zones where marine life can not live. The problem is particularly serious in the north where the Volga River, the Caspian’s largest source, breaks into a swath of small streams that flow into the Sea. In the north, a milky blue cloud of sediment seems to overtake the green algae swirls. Sediment commonly tints the water blue in the shallower sections of the Sea.

The world’s largest inland lake, the salty Caspian Sea separates Europe from Asia. Around the Sea, the snow has largely disappeared, except in the snow-capped Caucasus Mountains, and the land is turning green with the first flush of spring. Five countries border the Sea. Starting in the top right corner and moving clockwise, they include: Kazakhstan, Turkmenistan, Iran, Azerbaijan, and Russia. Uzebekistan, on the far right edge, and Armenia, on the left edge, are also shown in this image.