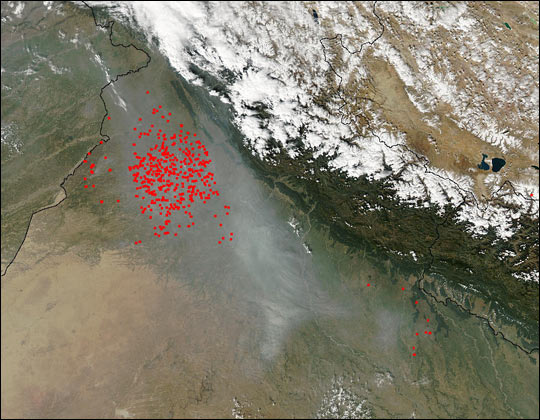 Fires Near Indus River Ongoing fires in northwest India contribute to a pall of haze that stretches eastward along the foothills of the Himalayas on October 22, 2002. In this true-color image from the Moderate Resolution Imaging Spectroradiometer on the Aqua satellite, fires are marked with red dots.

The Indus River (locally called Sindhu) is one of the longest rivers in Asia. Originating in the Tibetan Plateau in the vicinity of Lake Manasarovar. And the river runs a course through the Ladakh region of Jammu and Kashmir, India, towards the Gilgit-Baltistan region of Pakistan and the Hindukush ranges, and then flows in a southerly direction along the entire length of Pakistan to merge into the Arabian Sea near the port city of Karachi in Sindh. It is the longest river and national river of Pakistan.

Its estimated annual flow stands at around 243 km3 (58 cu mi), twice that of the Nile River. Although and three times that of the Tigris and Euphrates rivers combined. Also making it one of the largest rivers in the world in terms of annual flow. The Zanskar is its left bank tributary in Ladakh. In the plains, its left bank tributary is the Panjnad which itself has five major tributaries, namely, the Chenab, Jhelum, the Ravi, the Beas, and the Sutlej. Its principal right bank tributaries are the Shyok, the Gilgit, the Kabul, the Gomal, and the Kurram. And the Beginning in a mountain spring. Also fed with glaciers and rivers in the Himalayan, Karakoram and Hindu Kush ranges, the river supports ecosystems of temperate forests, plains and arid countryside.