Flooding in Bolivia in False Color 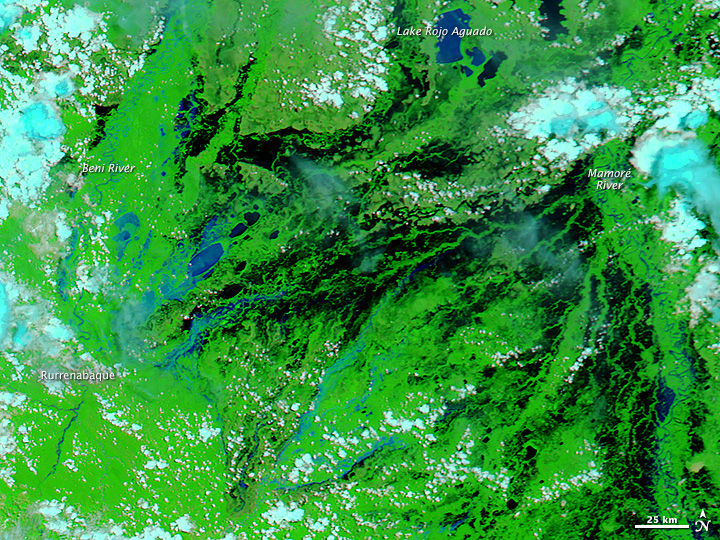 Residents of Bolivia’s low-lying Beni region are accustomed to flooding. Every February and March, rivers routinely burst their banks due to melting snowpack in the Andes Mountains and near daily rainstorms associated with the wet season. However, the floods Bolivians faced in February 2014 were unusually severe.

Weeks of heavy rains caused the Beni and Mamoré Rivers to swell, swamping more than 40,000 hectares (100,000 acres) of land. According to media reports, floodwaters killed at least 60 people and damaged the homes of more than 60,000. Large numbers of livestock were also affected. Preliminary estimates suggest at least 100,000 cattle were killed by floods, and hundreds of thousands more were threatened by starvation.

The false-color image at the top of this page was acquired by the Moderate Resolution Imaging Spectroradiometer (MODIS) on NASA’s Aqua satellite on February 17, 2014. For comparison, the second image shows conditions along the rivers under more typical conditions on March 28, 2013 (as seen by Terra). Sediment-laden flood and river water appears blue; flood water with less sediment appears black. A natural-color view of the same area is available here.

“What is happening, particularly in Beni province, is something never before seen in the history of Bolivia,” said president Evo Morales during the midst of the crisis.