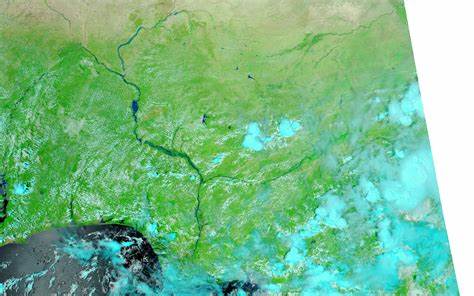 These images show the confluence of the Niger and Benue Rivers in southern Nigeria. The Moderate Resolution Imaging Spectroradiometer (MODIS) on NASA’s Aqua satellite captured the top image on October 11, 2012, and the bottom image on October 8, 2010. Both images use a combination of visible and infrared light to better distinguish between water and land. Water varies from electric blue to navy, vegetation is bright green, and clouds range in color from nearly white to pale blue-green.

News reports described major rivers and severe flooding in the Niger Delta. Although flash floods frequently occur during the rainy season from May to September, news sources described the 2012 floods as the worst in more than 40 years. Floods even damaged the homestead of Nigerian president Goodluck Jonathan, who declared the event a “national disaster” while visiting a relief camp outside Lokoja.

Nigeria has been home to a number of ancient and indigenous kingdoms and states over the millennia. The modern state originated from British colonial rule beginning in the 19th century, and took its present territorial shape with the merging of the Southern Nigeria Protectorate and Northern Nigeria Protectorate in 1914. The British set up administrative and legal structures while practising indirect rule through traditional chiefdoms. Nigeria became a formally independent federation in 1960. It experienced a civil war from 1967 to 1970. It thereafter alternated between democratically elected civilian governments and military dictatorships until it achieved a stable democracy in 1999, with the 2011 presidential election considered the first to be reasonably free and fair