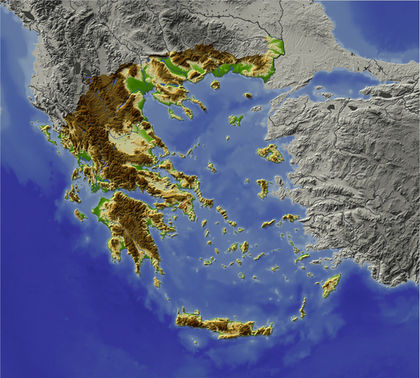 Greece’s 3,000 islands and 15,000 kilometers (9,300 miles) of coastline highlight this image acquired on November 11, 2005. The rich texture produced by the topographic variation in this image reveal that it is the most mountainous of all the European countries. Therefore comprising about 80% of the country’s land surface.

These mountains are the product of plate tectonics: the Eurasian plate, stretching from the Eastern portion of Siberia into the middle of the Atlantic Ocean. Also  converging with the African plate. The region is also known for its volcanic activity. Which stretch from the eastern of Greece to western Turkey. Which is the result of subduction of the African plate under a portion of the Eurasian plate.

This portion, or microplate, is called the Aegan plate is actually moving in a different direction than the rest of the Eurasia plate because it is being pushed by the Turkish microplate as well as the African plate. The most famous of these volcanoes is Santorini, which last erupted in 1950. It erupted in 1600 B.C., obliterating the city of Akroteri. Also an event which may have spawned the legend of city sinking under the ocean – Atlantis.