Hatzegopteryx: a terrifying ancient T-Rex of the skies • Earth.com

Hatzegopteryx: a terrifying ancient T-Rex of the skies 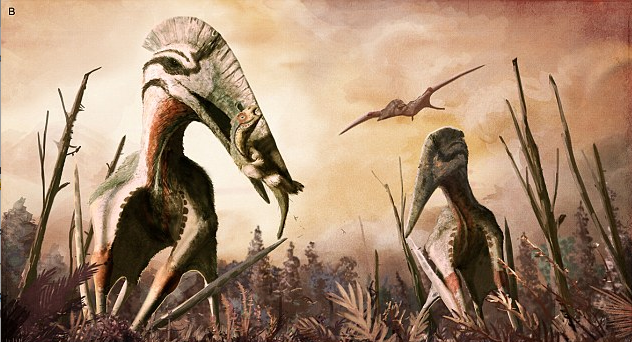 As if the legendary Tyrannosaurus Rex wasn’t scary enough on land, imagine one that could fly and easily gobble up adult humans. Meet the Hatzegopteryx.

A team of researchers from the University of Southampton and Portsmouth University have discovered the fossil of a massive ancient flying reptile. The fossil was found in modern day Romania and is believed to have belonged to a giant reptile species known as Hatzegopteryx.

The Hatzegopteryx roamed both land and sky 70 million years ago. It had a short but giant neck and a jaw more than 3 feet wide, allowing it to gobble up large prey.

Hatzegopteryx belonged to the pterosaur family, which were previously thought to only eat smaller prey. But researchers have now realized that they could eat other dinosaurs and animals as big as a horse. Pterosaurs existed during the tail end of the Cretaceous period, which was the closing act for dinosaurs.

Your average Hatzegopteryx had a large, stocky build that likely weighed a quarter of a ton. This one, in particular, lived in an area that used to be an island in the Tethys Sea. Unsurprisingly, the researchers believe this animal was the dominant predator on the island.

Included in the fossil findings were pieces of skull that led researchers to believe the animal had crests on their heads that varied in size and shape depending on gender.

The researchers reported their findings in an article published in the journal Peer J.