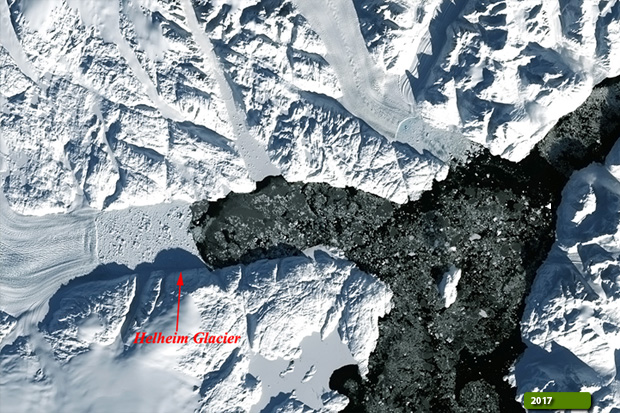 Helheim Fjord in eastern Greenland seen from the NASA P-3B on the Apr. 5, 2013 IceBridge survey flight. Helheim Glacier, one of the largest in Greenland, drains into the ocean through this fjord. Credit: NASA / Jim Yungel

Helheim Glacier is one of Greenland’s largest outlet glaciers and is named after the world of the dead in Norse Mythology. It feeds the waters of the Helheim Fjord, a branch of the Sermilik (Egede og Rothes Fjord) system, where there are a number of other glaciers calving and discharging at rapid rates such as the Midgard Glacier.

Three-quarters of Greenland is covered by the only permanent ice sheet outside Antarctica. With a population of about 56,480 (2013), it is the least densely populated territory in the world. About a third of the population live in Nuuk, the capital and largest city. The Arctic Umiaq Line ferry acts as a lifeline for western Greenland, connecting the various cities and settlements. In 1979, Denmark granted home rule to Greenland, and in 2008, Greenlanders voted in favor of the Self-Government Act, which transferred more power from the Danish government to the local Greenlandic government. Under the new structure, in effect since 21 June 2009.