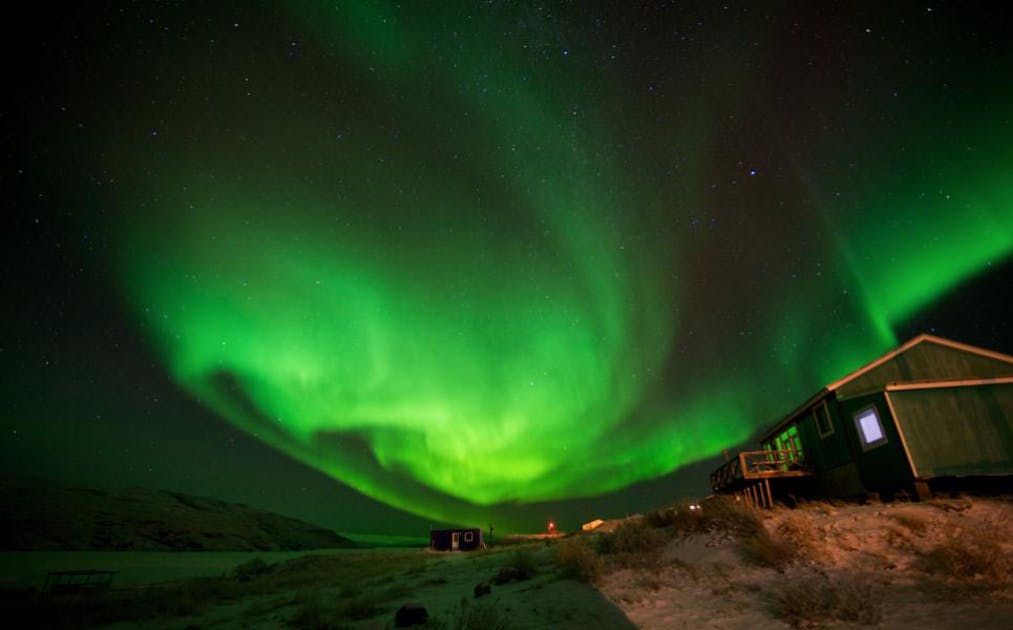 Kangerlussuaq occupies an alluvial flatland on the far end of the 190 km long Kangerlussuaq Fjord, straddling both sides of the Qinnguata Kuussua river estuary. East of Kangerlussuaq there is a confluence of the two major regional rivers, the Qinnguata Kuussua and Akuliarusiarsuup Kuua. The valley of the latter forms large quicksand plains. Both rivers originate from the Russell Glacier. The edge of the glacier is easily accessible and is a major tourist attraction from the town, as is the edge of the ice sheet in the Isunngua highlands to its northeast.
Highlands such as Tarajornitsut bound Kangerlussuaq from the north and south. To the southeast behind lake Tasersuatsiaq, which provides fresh water to the town, is the vast highland of Ammalortup Nunaa, original region artificially populated with 27 muskoxen. Aurora in Kangerlussuaq is also a beKangerlussuaq (English: “Big Fjord” from Greenlandic language), (Danish: Søndre Strømfjord), is a settlement in western Greenland in the Qeqqata municipality located at the head of the fjord of the same name (Danish: Søndre Strømfjord). It is Greenland’s main air transport hub and the site of Greenland’s largest commercial airport. The airport dates from American settlement during and after World War II, when the site was known as Bluie West-8 and then Sondrestrom Air Base. The Kangerlussuaq area is also home to Greenland’s most diverse terrestrial fauna, including muskoxen, caribou, and gyrfalcons. The settlement’s economy and population of 499 is almost entirely reliant on the airport and tourist industry. autiful destination.

The town is situated about 50 kilometres (31 mi) north of the Arctic Circle.