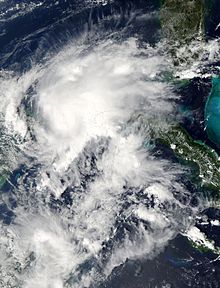 Hurricane Paula had been traveling in a northwesterly direction on October 13, 2010, when the storm briefly ground to a halt between Mexico and Cuba. At 1:00 p.m. Central Daylight Time (CDT), the U.S. National Hurricane Center (NHC) reported that Paula was stationary some 55 miles (90 kilometers) west-southwest of the western tip of Cuba. Still a Category 2 hurricane with winds of 100 miles (160 kilometers) per hour, Paula was expected to begin traveling toward the north-northeast.

The Moderate Resolution Imaging Spectroradiometer (MODIS) on NASA’s Aqua satellite captured this natural-color image of Hurricane Paula at 1:35 p.m. CDT (18:35 UTC) on October 13, 2010. Lacking the discernible eye it sported the day before, the storm nevertheless remains a solid cloud mass with the comma shape typical of cyclones. In the northeast, storm clouds reach southern Florida.

Hurricane Paula was a small hurricane that struck Honduras and Cuba in October 2010. The eighteenth tropical cyclone, sixteenth named storm, and ninth hurricane of the season, Paula developed from a low pressure area over the southwestern Caribbean Sea on October 11. Moving northwestward, it slowly organized and was upgraded to a tropical storm shortly thereafter. Around midday on October 11, Paula made landfall near Cabo Gracias a Dios at the border of Honduras and Nicaragua. In northeastern Honduras, strong winds destroyed several homes, while rainfall destroyed a few roads and dozens of buildings, include a school and a police station. Favorable conditions such as low wind shear and warm sea surface temperatures allowed Paula to reach hurricane status early on October 12. Further intensification occurred, and the storm peaked with winds of 105 mph (165 km/h) while curving northward on October 13.