Haze Along the Himalaya 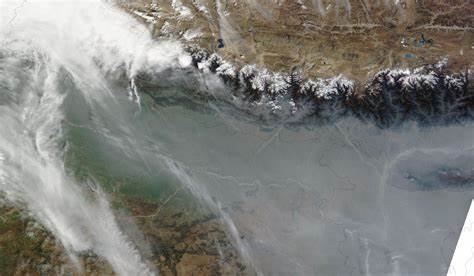 Haze Along the Himalaya. Haze hugged the southern slopes of the Himalaya in late October 2010. Straddling the border between Pakistan and India, the haze stretched over hundreds of kilometers.

The Moderate Resolution Imaging Spectroradiometer (MODIS) on NASA’s Aqua satellite captured this natural-color image on October 19, 2010. Haze forms a translucent veil over most of the scene, and concentrates in the southeast. The spray of red dots in India is a multitude of hotspots—areas where MODIS has detected unusually high surface temperatures. The hotspots are most likely agricultural fires. Although the fires undoubtedly contribute to the haze in the region, they may not account for all of it. The haze might also result partly from industrial pollution. Lifted by the subduction of the Indian tectonic plate under the Eurasian Plate, the Himalayan mountain range runs west-northwest to east-southeast in an arc 2,400 km (1,500 mi) long.

Its western anchor, Nanga Parbat, lies just south of the northernmost bend of Indus river. Its eastern anchor, Namcha Barwa, is just west of the great bend of the Yarlung Tsangpo River (upper stream of the Brahmaputra River). The Himalayan range is bordered on the northwest by the Karakoram and the Hindu Kush ranges. To the north, the chain is separated from the Tibetan Plateau by a 50–60 km (31–37 mi) wide tectonic valley called the Indus-Tsangpo Suture. Towards the south the arc of the Himalaya is ringed by the very low Indo-Gangetic Plain.The range varies in width from 350 km (220 mi) in the west (Pakistan) to 150 km (93 mi) in the east (Arunachal Pradesh). The Himalayas are distinct from the other great ranges of central Asia, although sometimes the term ‘Himalaya’ (or ‘Greater Himalayas’) is loosely used to include the Karakoram and some of the other ranges.