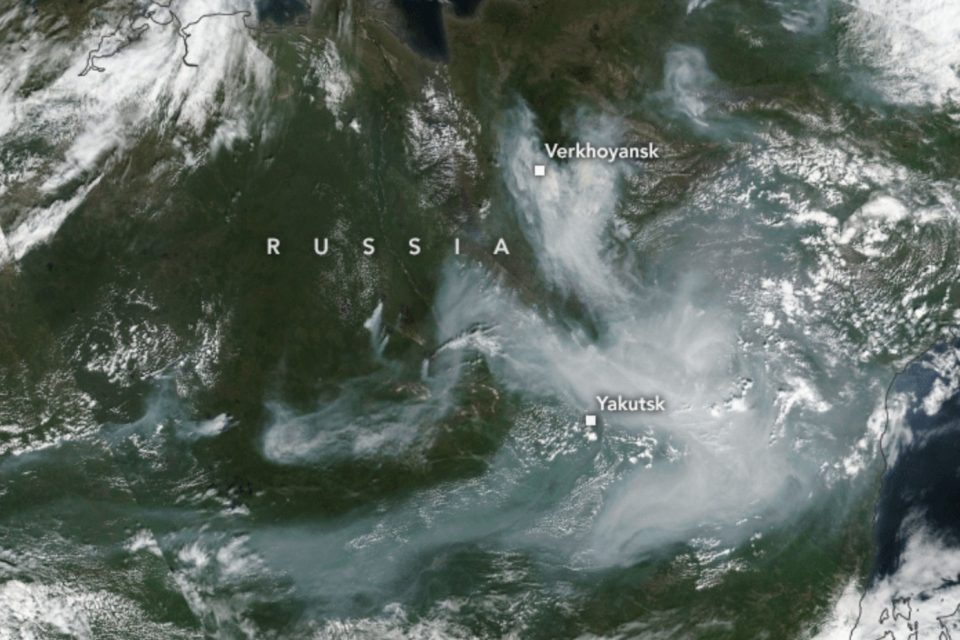 Intense summer fires in Arctic Russia. Today’s Image of the Day from NASA Earth Observatory features a satellite view of intense summer wildfires in eastern Siberia. In recent years, fires in this part of Arctic Russia have become more abundant, frequent, and destructive.

Mark Parrington is a senior scientist at the Copernicus Atmosphere Monitoring Service (CAMS) of the European Center for Medium-Range Weather Forecasts.

“After the Arctic fires in 2019, the activity in 2020 was not so surprising through June,” said Parrington. “What has been surprising is the rapid increase in the scale and intensity of the fires through July, largely driven by a large cluster of active fires in the northern Sakha Republic.”

Scientists estimate that about half of the fires in Arctic Russia this year are burning through areas with peat soil, which is highly flammable and releases a greater amount of CO2 compared to forest fires.

Parrington noted that fires in Arctic Russia released more carbon dioxide in June and July 2020 alone than in any complete fire season since records were first kept in 2003.

Dorothy Peteet of the NASA Goddard Institute for Space Studies said that the destruction of peat by fire is troubling for so many reasons.

“As the fires burn off the top layers of peat, the permafrost depth may deepen, further oxidizing the underlying peat.” Fires in Arctic peatland regions are not just releasing recent surface carbon, but stores that have taken 15,000 years to accumulate, said Peteet. They also release methane, which is a more potent greenhouse gas than carbon dioxide.

“If fire seasons continue to increase in severity, and possibly in seasonal extent, more peatlands will burn,” said Peteet. “This source of more carbon dioxide and methane to our atmosphere increases the greenhouse gas problem for us, making the planet even warmer.”