The Kaskawulsh River and Slims River in the Canadian Yukon • Earth.com

The Kaskawulsh River and Slims River in the Canadian Yukon 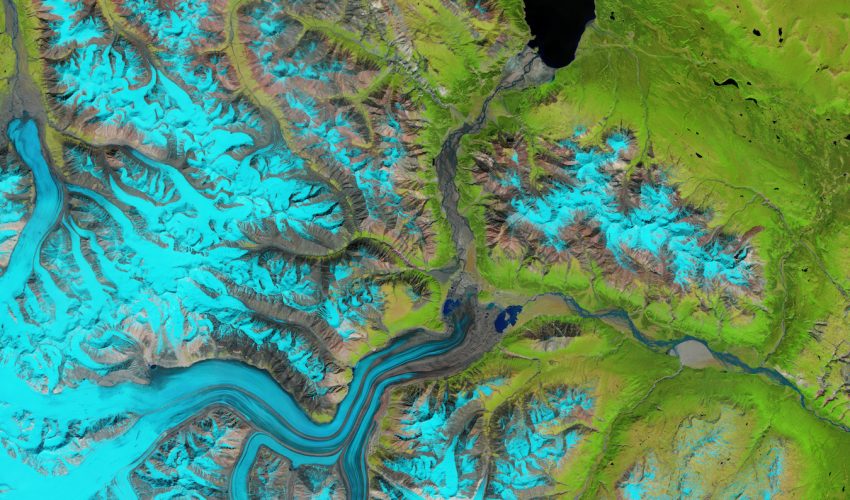 Today’s Image of the Day comes thanks to the NASA Earth Observatory and features a look at the Kaskawulsh River and Slims River in the Canadian Yukon.

This photo was taken by the Operational Langer Imager (OLI) on the Landsat 8 satellite.

During the spring and summer of 2016, the Kaskawulsh River took over the Slims River and hijacked its water supply. The act of “river piracy” has significantly reshaped the area’s water flow.

The Slims River (A’ay Chu) was a glacially fed river in the Canadian territory of Yukon. Until 2016, it originated in the Kaskawulsh Glacier, then ran approximately 15 mi (24 km) into the southern terminus of Kluane Lake.

Over the course of a few days in the spring of 2016 the flow of the river was changed. Where the meltwater of the Kaskawulsh Glacier had been draining in two directions, now it was all draining into the south-flowing Kaskawulsh river, and further on into the Gulf of Alaska, drastically reducing the size of the Slims.Researchers suggested the change in flow could be due to manmade climate change; this was the first time manmade climate change was implicated in the reorganization of a river.[6]

The Slims River was purportedly named after a pack horse that drowned while attempting to ford the stream during the 1903 Kluane gold rush. It is crossed by the Alaska Highway at Mile 1065 (Kilometre 1704) just south of its confluence with the lake.