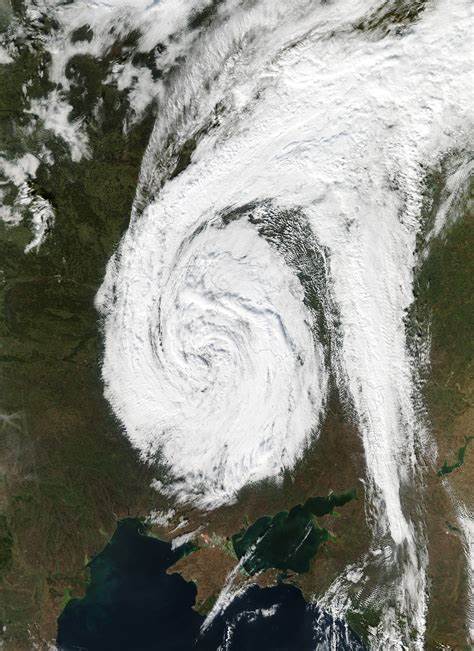 On October 18, 2012, the Moderate Resolution Imaging Spectroradiometer (MODIS) on NASA’s Aqua satellite observed a low-pressure system over eastern Europe. Cloud-free skies all around the system allowed MODIS a clear view of the weather event. The spiral-shaped storm straddled the border between Russia and Ukraine, and clouds extended just west of Ukraine’s capital city of Kyiv (Kiev).

George Huffman, a research meteorologist at NASA’s Goddard Space Flight Center, said that the low-pressure system MODIS observed looked like an occluded front. Both warm and cold fronts push across our planet’s surface. Cold fronts can follow warm fronts, and because cold fronts tend to move faster, they can catch up with the warm fronts. When this happens, the result is known as an occluded front.

“I would interpret the cloud band to the east as the cold front, and the band spiraling out from the low as an occluded front,” Huffman observes. The cold and warm fronts appear to intersect in the northeast. “I don’t think the size of this system is unusual, but what’s maybe a little unusual is how clear it is around the system, which really lets you see what’s happening.”

News reports described heavy rains and floods in western Ukraine in October 2012, as well as rain and drizzle in Belarus. Huffman detected precipitation in western Ukraine early on October 17, which pushed northward into Belarus later in the day. This low-pressure system may have been associated with the severe weather in the region.