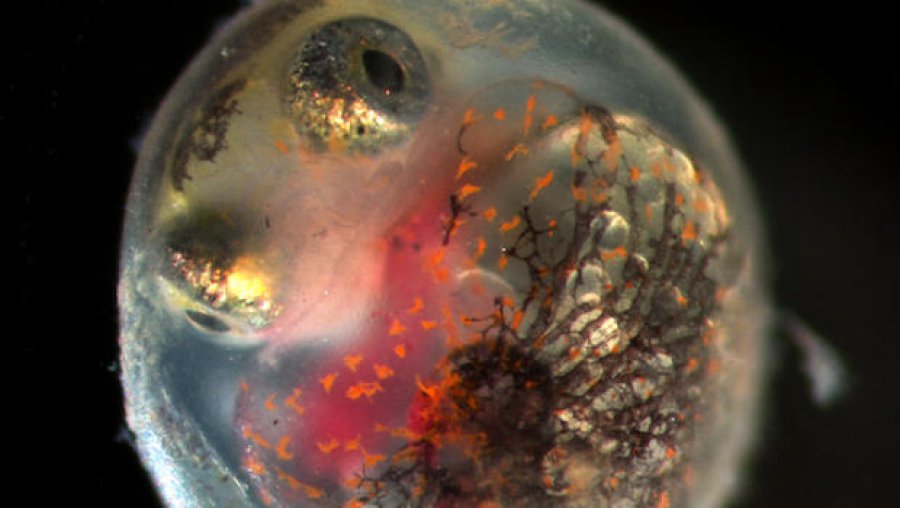 Today’s Image of the Day is a terrifying look at the ongoing effects of the Deepwater Horizon oil spill in the Gulf of Mexico nearly 7 years ago. On April 20th, 2010, an explosion on the oil rig caused 172 million gallons of oil to leak into the ocean, leading to catastrophic environmental consequences. Now, scientists are studying mutant fish that were deformed by the incident in order to figure out how humans may be effected.

A collaborative team of researchers from the University of Manchester and Stanford University have identified pollutants in these mutant fish that could have the potential to disrupt human heart function. These same pollutants are also found in high levels in the air surrounding major cities.

The primary chemical at play is called phenanthrene. It is found in crude oil but can enter the environment through car exhaust. The researchers studied how it affected the hearts of pelagic fish found near the site of the spill in the Gulf of Mexico. Phenanthrene has also been found to negatively impact the heart’s strength and rhythm in all vertebrates.

“These open ocean fish are hard to study in captivity, but understanding what component of the Deepwater Horizon disaster oil negatively affected the heart is really important,” said Dr. Holly Shiels from the University of Manchester. “It could help us distinguish the cardiotoxic potential of environmental catastrophes. It also provides insight into the possible cardiac impacts of urban air pollution on public health.”

The team published their findings in a report in the journal Nature Scientific Reports.

“Very little information to date has been available on individual PAH chemical toxicity beyond developmental and carcinogen effects,” said Dr. Shiels. “As a result we hope that this study will raise global interest in this important pollutant, given the prevalence of petroleum and PAHs in our environment.”