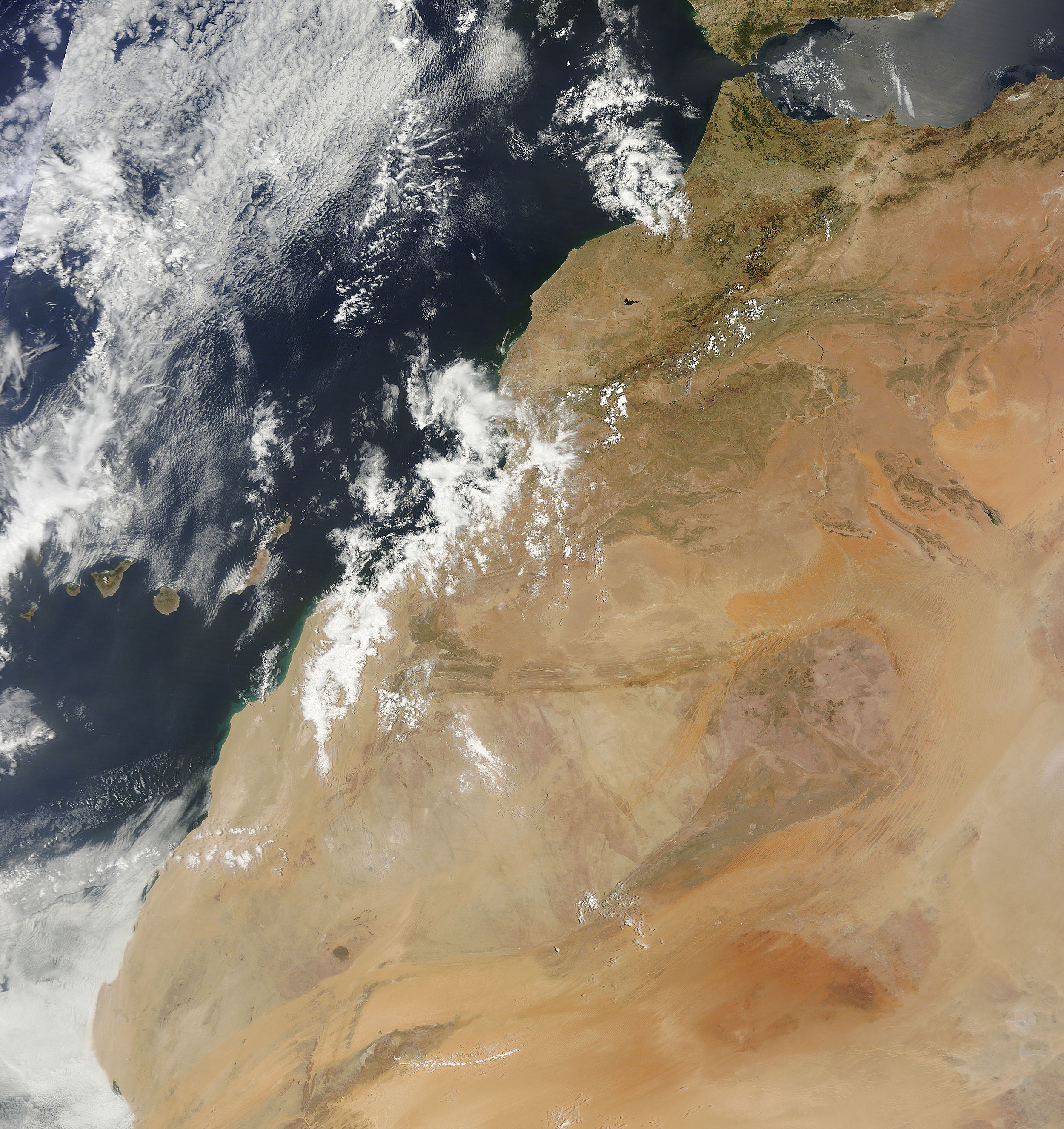 The skies were clear and dust-free over northwestern Africa in mid-July, 2015. The Moderate Resolution Imaging Spectroradiometer (MODIS) aboard NASA’s Terra satellite captured this true-color image on July 15 as it passed over the region.

Northwest Africa is bordered by the Atlantic Ocean on the west and the Mediterranean Sea in the north. They are connected by the Strait of Gibraltar, which measures only 8.9 mi (14.3 km) at its narrowest point. The Strait separates Spain from Morocco, and ferries travel across the waterway on a daily basis.

The image captures primarily two countries in Africa: Morocco (north) and Western Sahara (south), but also stretches inland to capture small parts of the countries of Algeria and Mauritania.

The landscape in northern Morocco is dominated by the rugged Atlas Mountains and highlighted by the green of vegetation, particularly along the northern coast. Morocco has 67.5% of its land in agricultural use and has a Mediterranean climate along the coast, becoming more extreme and arid towards the interior. To the south of the Atlas Mountains the landscape quickly gives way to the extremely arid lowlands and dunes of the Sahara desert, which appear in various shades of tan in this image. This area, known as Western Sahara, has a hot, dry desert climate. Rain is rare, but cold offshore air currents can produce fog and heavy dew which help maintain vegetation in some areas. Western Sahara has 18.8% of its land in agricultural use – primarily in pastureland, with nearly no cropland. Off the coast of Africa lies the Canary Islands, partially hidden under white clouds.

There are no borderlines overlain on this image to delineate political boundaries, but the boundaries between the country of Morocco and Western Sahara are currently unclear. According to the Central Intelligence Agency’s (CIA’s) World Factbook, in 1860, Spain occupied northern Morocco, which had formerly been ruled by a series of Moroccan Muslim dynasties. By 1912 Morocco’s sovereignty had eroded and the French imposed a protectorate over the country and this remained until independence in 1956. Spain withdrew from the southern area of what is today called Western Sahara in 1976, and Morocco has extended its defacto administrative control to about 80% of that territory. However, the UN does not recognize Morocco as the administering power for Western Sahara. It has monitored a cease-fire between Morocco and the Polisario Front, which is Western Sahara’s liberation movement, as well as leads negotiation efforts to resolve the issues between the parties. The political status over much of the region remains unresolved.