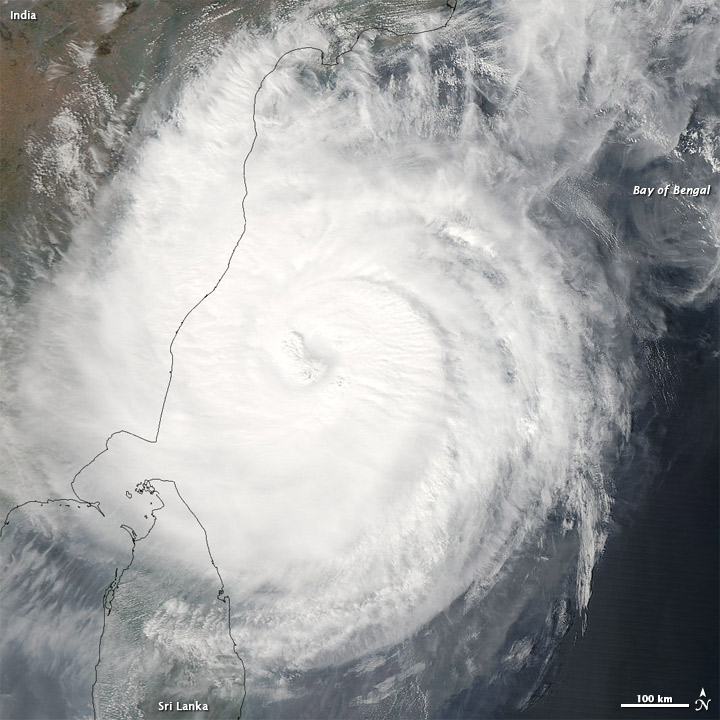 Tropical Cyclone Thane came ashore in southeastern India in late December 2011, killing at least 47 people, flattening homes, destroying crops, and leaving tens of thousands in need of emergency aid. Some aid workers feared that Thane may have caused more property and infrastructure damage in the region than the tsunami that struck in 2004.

The Moderate Resolution Imaging Spectroradiometer (MODIS) on NASA’s Aqua satellite captured this natural-color image on December 29, 2011. The center of the storm spins just off the coast of southeastern India, and clouds extend over India and Sri Lanka.

Thane formed as a tropical storm on December 25, 2011, and strengthened into a cyclone by December 28. When the storm made landfall, it brought high winds and tidal surges. Thane knocked out power in many areas, disrupted drinking-water supplies, and blocked roads with uprooted trees.Very Severe Cyclonic Storm Thane was the strongest tropical cyclone of 2011 within the North Indian Ocean. Thane initially developed as a tropical disturbance within the monsoon trough to the west of Indonesia. Over the next couple of days the disturbance gradually developed further while moving towards the northwest, and was declared a Depression during December 25, before being declared Cyclonic Storm Thane during the next day. As it was named, Thane started to turn towards the west under the influence of a subtropical ridge of high pressure before its development slowed down during December 27, as a strong outflow and marginally favourable sea surface temperatures fought with persistent vertical wind shear. After its development had slowed down during December 27, Thane became a Very Severe Cyclonic Storm during December 28, before as it approached the Indian states of Tamil Nadu, it weakened slightly. Thane then made landfall early on December 30, on the north Tamil Nadu coast between Cuddalore and Puducherry and rapidly weakened into a depression.