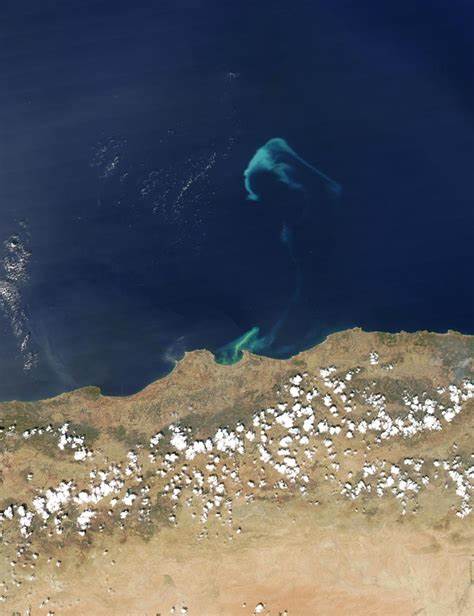 Phytoplankton Bloom off Algeria. After a particularly large storm over northern Algeria on August 10, 2003, a pale blue-green bloom appeared in the waters just off the coast near the mouth of Bay of Algiers. The rainstorm likely washed nutrients such as sewage into the water. These nutrients spurred the growth of microscopic marine plants, called phytoplankton. The phytoplankton grew in such large quantities that the bloom became visible from space, as shown in this series of Moderate Resolution Imaging Spectroradiometer (MODIS) images from August 10 – August 13, 2003.
The images show the bloom in different stages. The first, from August 10, shows the storm rolling over the Algerian coast. On August 11, the bloom is visible in its early stage; the remnants of the storm are still visible over the coast. The next two images show the bloom die and dissipate. Blooms like this one are usually short-lived because the supply of nutrients is limited; once the phytoplankton have consumed all of the nutrients, they die off quickly, and the bloom fades. For more information about phytoplankton, please visit the Earth Observatory. Also Phytoplankton Bloom off Algeria happens often across the coast line. Therefore the image above shows the pretty blue and white colors.